Skip to content
You are here
Home > Fattening Food > Wondering Whether All Vegan Food is Healthy? WH Investigates


Swing by on any evening of the week and you’ll find Temple Of Seitan jumping.

If you’ve never heard of it, it’s a vegan fast food chain where the mouthwatering aroma of fried chicken hangs in the air, tables are crowded and trays are piled high with burgers, sticky wings, mac ’n’ cheese and loaded fries.

It could be any fast food joint – except for the fact that no animals were harmed in the making of these meals. ‘People think vegans just eat hummus and avocados, but look at this place,’ says Kate, 22, taking a bite out of her burger.

Is all vegan food healthy? 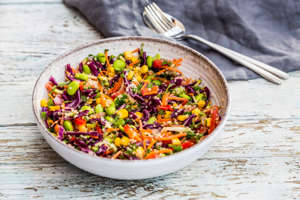 The rise in vegan convenience products

The mung bean-munching, ultra-alt reputation long held by vegans is no more.

There are now more than 3.5 million plant-based eaters in the UK, a 700% spike since 2016, and vegan barbecuing was market analyst Mintel’s leading food and drink trend this summer. Supermarkets are chasing the vegan pound by stocking aisles with animal-free foods that scream convenience.

Consumer research group Kantar says spending on vegan foods in January 2018 – including vegan supermarket foods standing in as meat alternatives and vegan ready meals –was up £30 million year-on-year. Waitrose has broadened its vegetarian and vegan range by 60% and Tesco has even hired a director of plant-based innovation.

But while going vegan used to be an endeavour that necessitated getting more creative in your own kitchen – swapping the beef in your stir-fry for tofu, or navigating your way around an aubergine– now, veganism has jumped into bed with fast food. ‘Chicken’ made from a protein called seitan; ‘pulled pork’ made from jackfruit and macaroni in a cashew-based ‘cheese’ sauce – it’s all up for grabs.

Where can you eat vegan junk food? 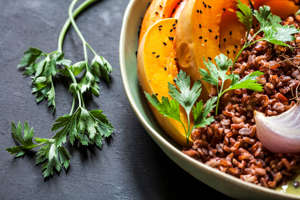 © Getty
A wholesome bowl of vibrant roast vegetables and curry with Hyacinth beans and red rice.


You’ll know from our handy guide to vegan restaurants and chains with vegan foods that there are vegan options on pretty much every menu nowadays-from Wagamama’s vegatsu, to Prets infamous vegan cookie, there’s something for everyone. Famous vegan junk food joints in the UK include:

But is all vegan food healthy?

Animal product or otherwise, the nutritionally savvy know that white refined carbs and highly salty food is not the way – so why is it we’re all feasting on this junk like it’s any different from the stuff you’d find under the Golden Arches?

‘For too long, a vegan diet has been seen as a bit worthy, but new-gen vegans refuse to compromise on indulgence and fun,’ says Amy Thorne, co-founder of food awards group The Young British Foodies. ‘Now, you can eat vegan and still be the life and soul of the party.’

Vegan junk food: what to eat and what to avoid

Which is all well and good – if you know what’s going on in the kitchen.

Of the vegan junk food outlets WH approached for their nutritional information, none were forthcoming. So it’s on you to unpick the type of processes that go into turning one of your five-a-day, like jackfruit (a relation of the fig), into the kind of finger-licking fare you’d sell your nan for on a hangover.

Let’s start with vegan ‘chicken’, aka seitan. It comes about by washing the starch from wheat dough to leave you with insoluble gluten, an elastic mass which is shaped, fried and customarily served up with sugar-laden sauces. Tasty, yes; good for the body, not so much. ‘It has some iron and some B vitamins, but not in great quantities and, certainly as a meat replacement, nutritionally it’s not as beneficial,’ says dietitian Sophie Medlin.

‘If you were to slice your seitan and throw it in a stir-fry, it wouldn’t be unhealthy, but once it’s been flavoured and had lots of sodium added and things like stabilisers and binders, then it becomes a highly processed food – and that’s not something you should be including in your diet. You could argue that it’s even more processed than the average high street burger, because at least the chicken or beef, though not likely to be high quality, is closer to its natural form.’

Then there’s mac ’n’ cheese. Any chance switching from dairy to a vegan alternative upgrades this from junk food to healthy fare? Not really.

Dietitian and BDA spokesperson Anna Groom points out that while a serving of dairy-free ‘cheese’ may be lower in calories than, say, Cheddar, the saturated fat and salt content tend to be higher. Vegan cheeses are often made from cashews, which are full of good stuff, such as vitamins E, C and B6, along with minerals like magnesium and zinc. But to turn those raw kernels into melted cheese atop mac involves a ton of processing.

‘The cashews are converted into nut milk, strained to forma solid mass, then flavoured, potentially with a lot of salt. There will also be a lot of additives like emulsifier and setting agents used to change the texture,’ says Medlin. The unfortunate consequence is that the dietary prowess of cashews doesn’t translate to the plate.

It’s a similar story with jackfruit. ‘A starchy carbohydrate, similar to a potato, it naturally contains vitamins A, C and B6, alongside essential minerals,’ explains Medlin.

But, if you’re in the UK, you’ll be eating the tinned variety. Its stringy, super-absorbent consistency means, when paired with a good marinade, it does a decent impression of pulled pork, but valuable nutrients can be lost during the tinning process, especially vitamin C.

‘It’s just carbohydrate drowned in sugary sauce,’ adds Medlin. ‘A portion of vegan “pulled pork” can contain 10% of your sugar RDA and a third of your recommended salt intake.’ And that’s before you add any sides.

Nutritionist Alice Mackintosh believes that tempeh, an Indonesian staple that, like tofu, is made from fermented soybeans– but with the whole bean retained – is an under appreciated winner.

‘Tempeh is a great choice in terms of overall health, offering a complete protein source alongside fibre, minerals and vitamins,’ she says. ‘I still wouldn’t recommend tempeh as your only protein source, but, as far as meat replacements go, it’s the best choice.’ And so to our old friend, the aubergine.

That a nutritionally savvy vegan will eat a doughnut just because it’s plant-based highlights something experts call ‘restraint theory’.

‘It suggests that when we overly restrict food and food groups, we will most likely end up eating unhealthily in terms of both the volume and types of food,’ says Dr Meg Arroll, chartered psychologist and author of The Shrinkology Solution. 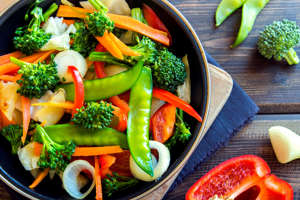 ‘Because I can eat these treats within a vegan diet parameter, I absently mindedly snack my way through packets’

In other words, embark on a diet that necessitates drawing up ‘can eat’ and ‘can’t eat’ columns and if something falls into the former, you’re more likely to eat it. Take O’Kane who, within weeks of trying out plant-based life, was picking up packets of Oreos and Bourbon biscuits (both vegan, FYI) with her weekly shop.

‘I’ve always tried to eat mindfully, if not healthily, but because I can eat these treats within the parameters of a vegan diet, I’m absent-mindedly snacking my way through packets at a time, despite knowing they’re doing nothing for me nutritionally.’ It’s likely a driving factor behind the rise of stacked soya burgers and triple-fried bean chilli cheese fries.

If you’re chowing down more calories and refined carbs than you ever did before, take note. ‘If your motivation for dietary change is primarily for health, and a vegan diet is compromising your nutrition, then it’s time to step back and think about what a healthy and sustainable diet really looks like to you,’ says Dr Arroll.

Fast food aside, the simple fact still stands that transitioning to a vegan diet without the correct advice can be detrimental to health – something Curry found out first-hand last year. 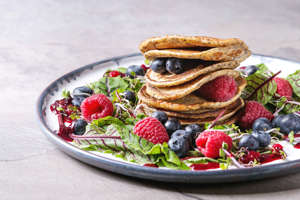 
‘I’m a qualified PT and have undertaken nutrition courses, so I thought, with the help of savvy Instagram scrolling and internet research, I could design a satisfactory vegan diet for myself –but I was wrong,’ she recalls. ‘I was obsessed with getting enough protein, but ended up overloading on fats and carbs through sheer boredom. My meals were processed vegan substitutes alongside rice and broccoli.

Yes, I lost weight, but I wasn’t sleeping well and my mood and energy levels were terrible, making me binge whenever I crashed. In the early days, I’d even turn to meat and dairy products. I knew it wasn’t sustainable, so I sought help from PT Adam Stansbury and now my diet has completely changed. I understand my protein needs and get plenty from tofu, beans and the vegan protein shake I have each day. I’m eating way more fruits, vegetables and different flavours – and I’m leaner and stronger.’

‘Vegan bloggers and Instagrammers need to stop sending the message that a plant-based diet is inherently perfect,’ says Medlin. ‘There are risks – the main one being vitamin B12 deficiency. The human body cannot function without it. Early signs of deficiency are a tingling in your fingers and toes, a lack of concentration and mood changes, but eventually it can lead to paranoia and delusions.’ 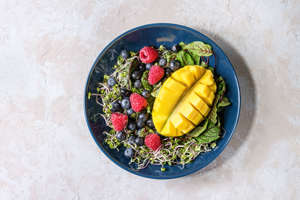 
And if you want hard evidence to help you sidestep said chips, research in The American Journal Of Clinical Nutrition has shown that eating two or three portions of French fries – or any fried potato – a week can double your risk of mortality. Swap them for potatoes cooked any other way and the association disappears.

‘Whatever your dietary choices, take control of your nutrition and learn how to cook’

Of course, the odd bit of ‘dirty munch’ won’t kill you, but the fact that it’s plant-based doesn’t make it any worthier, so focus instead on making your everyday diet as balanced as possible. ‘Whatever your dietary choices, you need to take control of your nutrition and learn to cook, rather than relying on convenience products,’ says Stansbury. ‘Eat an array of different-coloured fruits and vegetables, plan, prep and cook.’

Have a vegan doughnut or a vegan pizza once a week if you want to, but don’t rely on them. Everything in moderation – including moderation. It’s no different from the advice I would give to people eating meat.’

And choose your vegan protein sources wisely. ‘Soy is a good source and provides all of your amino acids,’ says Medlin. ‘And lupin beans have a similar nutritional profile to peanuts– they’re more of a naturally occurring food than, say, seitan, so have a better balance.’