Skip to content
You are here
Home > Hair Fattener > Thick, lustrous hair may be weaker than thinner hair, a new study finds


Thin hair is often stronger and more robust than thicker hair according to scientists who have been examining the way strands can break.

They tied individual strands to a machine that gradually and very gently pulled on them until they tore apart.

Researchers found that thin locks were able to withstand greater tension from the machine before breaking compared to thicker strands.

This is due to the fact that cracks form in some of the thinner hair strands as they are pulled, rather than simply snapping, says lead researcher Wen Yang.

They studied the strands with a microscope after they were pulled and found that despite most hair having a similar structure, strands broke in different ways.

Mammals with hair strands among the widest in diameter – such as boars, giraffes and elephants – generally made a clean break.

Those with a smaller diameter, including humans, horses and bears, succumb with an uneven break, more like a tree branch snapping in a storm.

Despite an elephant hair being four times thicker than a human hair, it could withstand half the force pulling on it, according to Dr Yang. 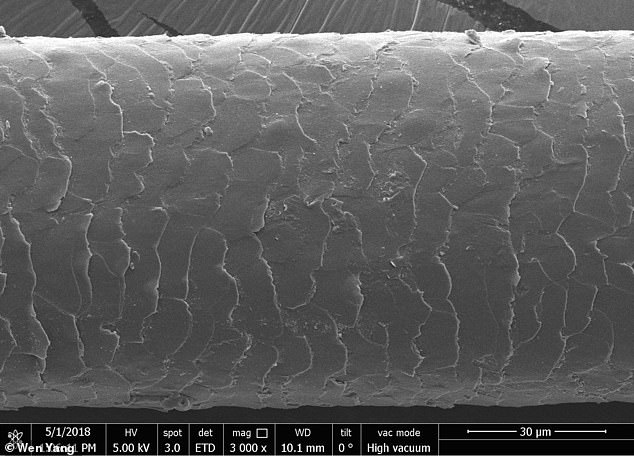 This is a human hair strand before being broken. They studied the strands with a microscope after they were pulled and found that despite most hair having a similar structure, strands broke in different ways

This is down to the way smaller diameter strands ‘shear’ when pressure is applied.

“Shearing is when small zig-zag cracks are formed within the material as a result of stress’, said the University of California, San Diego, researcher.

“These cracks then propagate, and for some biological materials, the sample isn’t completely broken until the small cracks meet.

“If a material shears, it means it can withstand greater tension and thus is tougher than a material that experiences a normal fracture.”

Previous studies found that human hair has strength comparable to that of steel when adjusted for density.

Researchers say this is because of hair’s hierarchical structure – meaning that human hair is composed of an outer layer called the cuticle that wraps around an inner cortex made of many small fibers linked by chemical bonds. 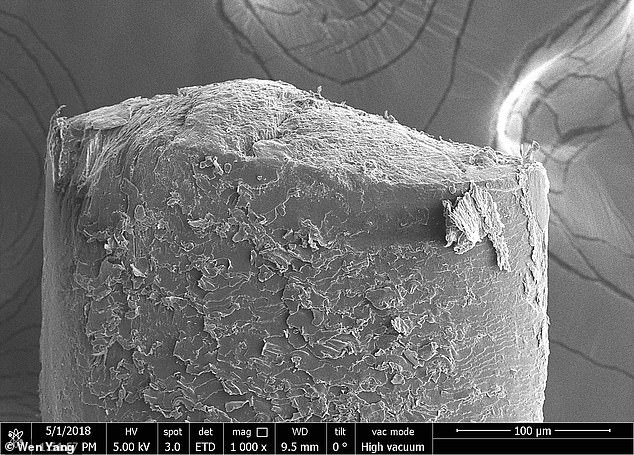 This image shows boar hair, which has a diameter of over 200 nm and breaks in a normal fracture. Researchers found that as thicker hair breaks more cleanly it can’t withstand force for as long as thinner hair that breaks with cracks

Co-author Robert Ritchie added: “The notion of thick being weaker than thin is not unusual, and we have found that happening when studying brittle materials like metal wires.

“This is actually a statistical thing, which is a bigger piece will have a greater possibility of having a defect.

“It’s a bit surprising to see this in hair as hair is not a brittle material, but we think it’s because of the same reason.” 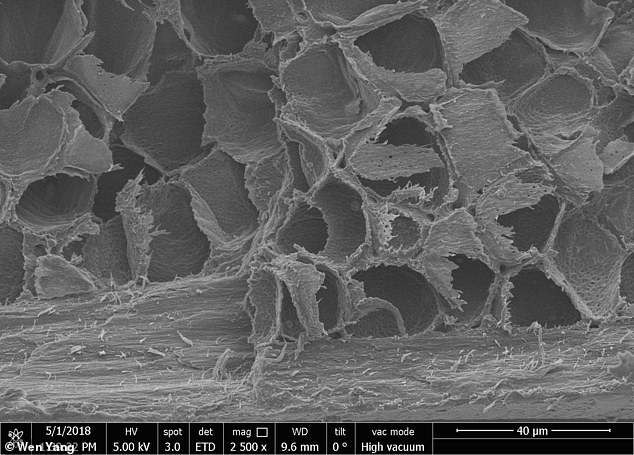 This image shows the cortex of javelina hair, which has a foam-like structure and made of porous cells. Despite an elephant hair being four times thicker than a human hair, it could withstand half the force pulling on it, according to Dr Yang

Dr Yang says the findings could help scientists develop better synthetic materials in future by attempting to replicate the structure of hair.

“There are many challenges in synthetic materials we haven’t had a solution for, from how to manufacture very tiny materials to how to replicate the bonds between each layer as seen in natural hair,” she says.

“But if we can create metals that have a hierarchical structure like that of hair, we could produce very strong materials, which could be used as rescue ropes and for constructions.”

The findings are presented in the Matter journal.