Michal Maimaran and Yuval Salant were having a family dinner at a sushi restaurant when their three children decided they did not want to eat the maki rolls on the table. Instead, they wanted to eat just the tiny slivers of avocado inside the rolls.

The obliging parents, who are also faculty members at Kellogg, ordered a side of the finely cut avocado. The children ate the avocado and immediately wanted more.

“We ended up ordering another side, and then another,” says Maimaran, a research associate professor of marketing.

Maimaran and Salant got curious. Though their children had eaten avocado before, they had not been very interested in it. Did they want the avocado in the restaurant simply because there was a limited amount of it?

And if that was the case, could Maimaran and Salant, an associate professor of managerial economics and decision sciences, use the insight to their parental advantage, ensuring their children make healthier food choices?

“That was the beginning of this project,” Maimaran says.

© Provided by Atlantic Media, Inc.
A child eyes oranges at a Hypermart supermarket in Jakarta

Limiting a healthy food for a child might seem counterintuitive since parents want their kids to eat more of it. So most parents take a different tactic—promising their children rewards for eating healthy foods, or trying to sway them by explaining that vegetables are good for their development—with varying degrees of success.

When it comes to placing limits, parents generally focus on unhealthy foods and activities, like candy and screen time.

“We want to convince our children to independently do things that are beneficial to them, and hopefully this research can help with that.” 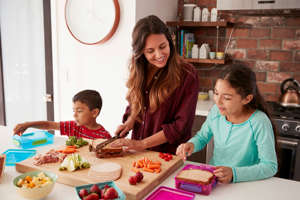 
To study this, they recruited a group of 4- and 5-year-olds at a local preschool and conducted three studies.

In the first study of 51 children, the researchers invited the children into a room one at a time and told them they could play with Lego blocks. Some children were told they could only play with the Legos for 10 minutes; others were not given a limit.

The researchers found that the children who were given a limit played longer with the blocks—on average, a minute and a half longer than the other children.

After playing with the Legos, the children were invited to go to another table, where a plate of carrots was sitting. Some children were also told, “I’m sorry, but these are all the carrots we have.” The rest were not.

Children who were told carrots are limited ate about 50% more carrots than the other children, and more than half ate all the carrots (versus 35% in the no-limit group).

“This is the age where children start to be independent and make their own choices, but there is still room to influence them,” Maimaran says. “This shows that limiting the amount of a particular food makes it more desirable, even in settings where children might not like the food as much to begin with.”

Watch: These Are the Top 10 Superfoods of 2019, According to Dietitians (Cooking Light)

How to encourage healthy eating for kids

A second study confirmed this finding.

“Positioning the carrots as limited made the children consume almost twice as much carrots,” Salant says.

Additionally, the children with limited carrots were much more likely to begin their snack with a carrot. In fact, 64% of this group began with a carrot, versus 34% in the other group.

In the third study, the researchers wanted to test their hypothesis without explicitly telling the children that one of the choices was limited. Instead, children were invited to take home either a small cup of grapes or a small cup of crackers. One group was offered equal numbers of cups of grapes or crackers to choose from; the other was offered more cracker cups than grape cups.

For the children who were offered the equal number of options, only 26% chose grapes. But when the grapes were limited, 52% chose grapes.

“You don’t even need to say anything to children. You can just present them with a choice,” Maimaran says. “It also suggests this could work with younger children who may not understand the verbal manipulation. If you want them to eat fruits or vegetables, just offer less of it.” 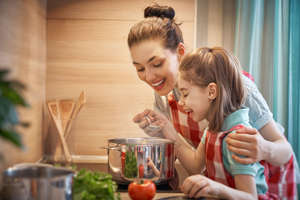 © Getty
Healthy food at home. Happy family in the kitchen. Mother and child daughter are preparing on the cooker.

The psychological explanation behind this phenomenon is not fully clear.

Researchers know that adults are attracted to products with limited quantities partly because they view that as a sign of strong demand and therefore high quality. Maimaran and Salant surmise that the young children don’t yet view limited products this way; instead, they may choose a limited product due to a fear of missing out (known as FOMO), or by placing higher value on the freedom to choose when options are limited.

“Limiting the amount of a particular food makes it more desirable, even in settings where children might not like the food as much to begin with.”

Salant now uses the limited-availability strategy himself to get his children to eat certain foods. (Maimaran reports that Salant has been successful using this strategy with vegetables.)

But he says parents can use these limiting strategies to encourage their children to make all kinds of healthy decisions. “This could extend to encourage children to experiment and explore,” Salant says.

Of course, no parent wants to limit a serving of carrots, only to have the child eat it and then want more after being told that there were no more carrots available, so the researchers suggest limiting serving sizes to the optimal amount the child should eat.

On the flip side, parents also don’t want to offer their children unlimited sweets and screen time, only to have their children take full advantage of that offer. Finding the right balance ultimately involves trade-offs, and the researchers hope to conduct further studies into encouraging children to make the best decisions themselves.

“We want to understand how kids make choices and how we can encourage choices that have long-term benefits for the child,” Salant says. “As parents, we are all engaged in persuasion with our children. We want to convince our children to independently do things that are beneficial to them, and hopefully this research can help with that.”

This article was previously published in Kellogg Insight. It was republished with permission of the Kellogg School of Management.

Gallery: 40 Nutrition Experts Told Us The Foods You Should Be Eating Every Day (Eat This, Not That!)

Explore the issues faced by the UK’s most vulnerable children and young people this summer and discover what you can do to help.