Body fat is a fact of life. We all have it, and many people would like to have less. But recent research is turning some of our assumptions about fat upside down. Scientists now believe there’s a type of fat, hidden inside us, which could actually help make us thinner. 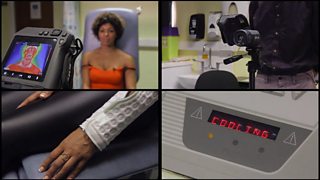 This is called “brown fat”. Unlike “white fat”, which stores energy, brown fat cells burn energy to release heat when we are cold. Gramme for gramme, brown fat is capable of producing 300 times more heat than any other tissue in the body. The more heat produced, the more calories are burned.

Where is my brown fat?

We all start our lives with stores of brown fat, which is crucial for helping us keep warm as babies. Scientists used to think that brown fat disappeared or stopped working by the time we reached adulthood, as our bodies develop other ways to regulate temperature, like shivering. But recent research has revealed that adults still have small amounts of functional brown fat tissue, particularly around the neck and shoulder regions.

Researchers have also discovered a third type of fat, called “beige fat”, which is found within pockets of white fat around the body. Results from animal tests and laboratory experiments using cells suggest that beige fat can be activated to behave like brown fat and burn excess calories stored within white fat tissue. Although it has a lower capacity to burn energy than brown fat, researchers believe there may be far more beige fat in the body than brown fat, so it could have a cumulative effect when activated.

How could brown fat help me lose weight?

Intriguingly, researchers think there could be ways of ramping up the calorie-burning potential of brown and beige fat, which could help to promote weight loss if our energy expenditure is increased above energy intake.

One of the scientists pioneering this research is Professor Michael Symonds at the University of Nottingham. Previous studies carried out by his lab have shown that brown fat can be stimulated by different triggers, such as cold temperatures, and that this can increase energy expenditure in adults.

We sent Dr Zoe Williams to Nottingham to put this to the test. Using a purpose-built thermal imaging camera, Professor Symonds was able to visualise the amount of heat being produced by the brown fat in Zoe’s body. Wearing a temperature-controlled blanket set to 15°C (equivalent to freshly drawn cold water) notably increased the amount of heat produced by Zoe’s brown fat.

We know that cold exposure stimulates your brown fat, so just being in a cool environment, or doing cold water swimming, could help activate both brown and beige fat stores. “Training” brown fat by repeated activation forces it to become better at burning energy. But this kind of training would involve weeks of daily cold exposure for several hours – something we modern humans rarely, if ever, experience. Recent research has shown that certain dietary ingredients such as chilli and caffeine can also stimulate these cells to burn energy in lab conditions. But further research is needed before we know the effect of dietary components on brown and beige fat in the real world.

Are there other benefits of brown fat?

Having too much white fat in our body can increase our risk of Type 2 diabetes and heart disease. Brown fat, on the other hand, is present in much smaller quantities, and the more we have, the better it is for our metabolic health. As well as increasing energy expenditure, which may help to promote weight loss, brown fat’s ability to break down glucose and lipids in the process of producing heat may have additional health benefits. This research is in its early stages, but scientists believe that increasing the amount or the activity of your brown fat may help combat diabetes by improving blood glucose regulation.

The idea of having cold showers or eating chillies may not appeal to most of us! But research into the best way of boosting our brown and beige fat is at an early stage, and we will learn much more in the coming years.