If you’ve ever found yourself wondering about the beauty standards Western women are held up to, then you should perhaps also spare a thought for the Mwila tribeswomen of Angola.

Among the most striking of all Angola’s remote tribes, the Mwila people are known for their elaborate dresses, jewellery and hairstyles.

Adult women are expected to style their hair using a mixture of oil, crushed tree bark, butter, dried cow dung and herbs in order to shape it into thick dreadlocks which are then dyed using oncula, a type of crushed rock.

These dreads are then embellished using shells, beads and sometimes dried food to make them even more elaborate and eye-catching.

The Mwila tribe live in the sparsely populated Huila province of southern Angola and are well-known for their elaborate styles of dress, their hair decoration, and necklaces 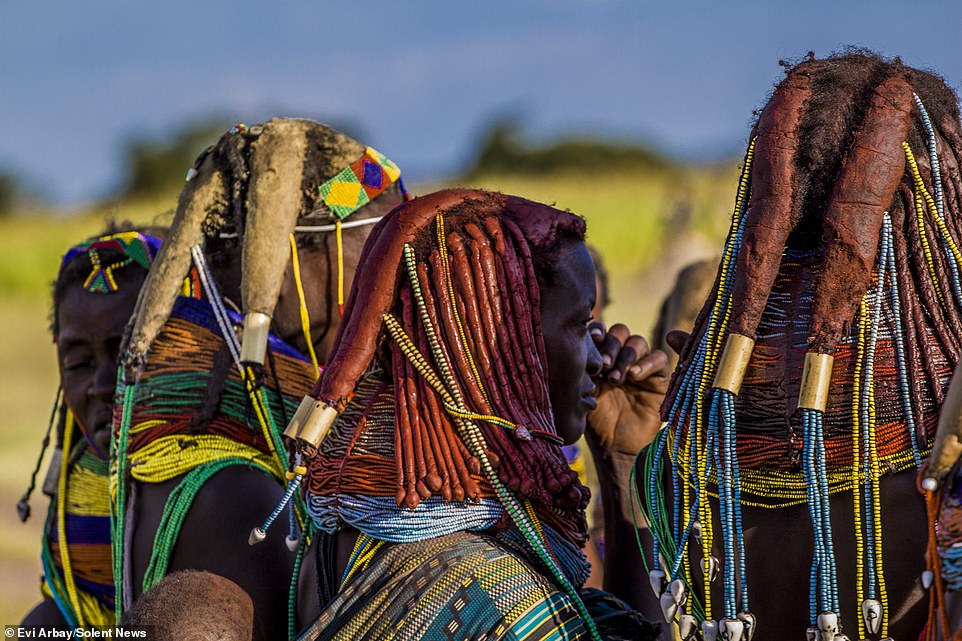 Women use a mixture of oil, crushed tree bark, butter, dried cow dung and herbs to shape their hair into thick dreadlocks, typically numbering between four and six, though there can be more 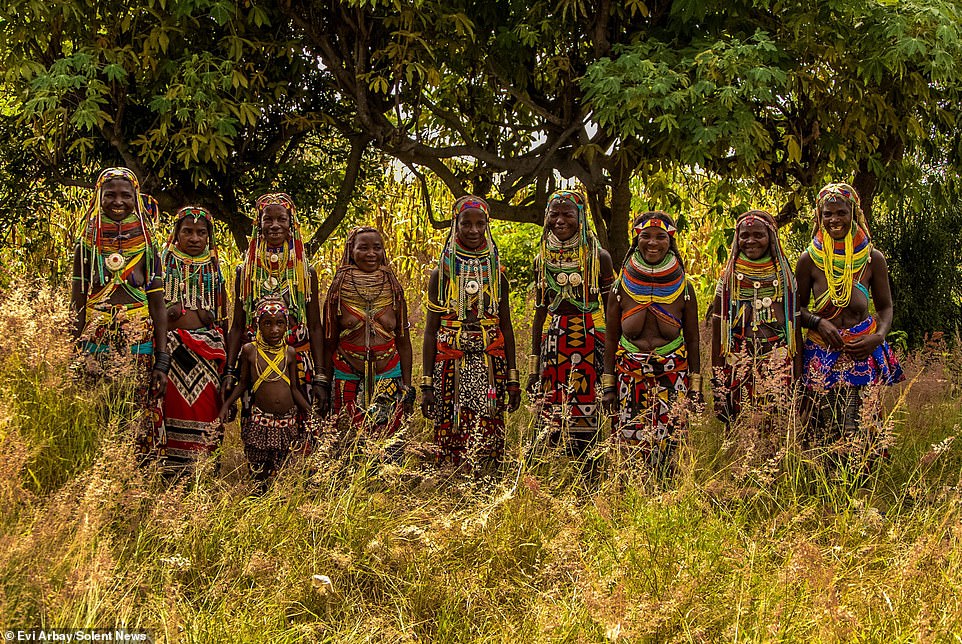 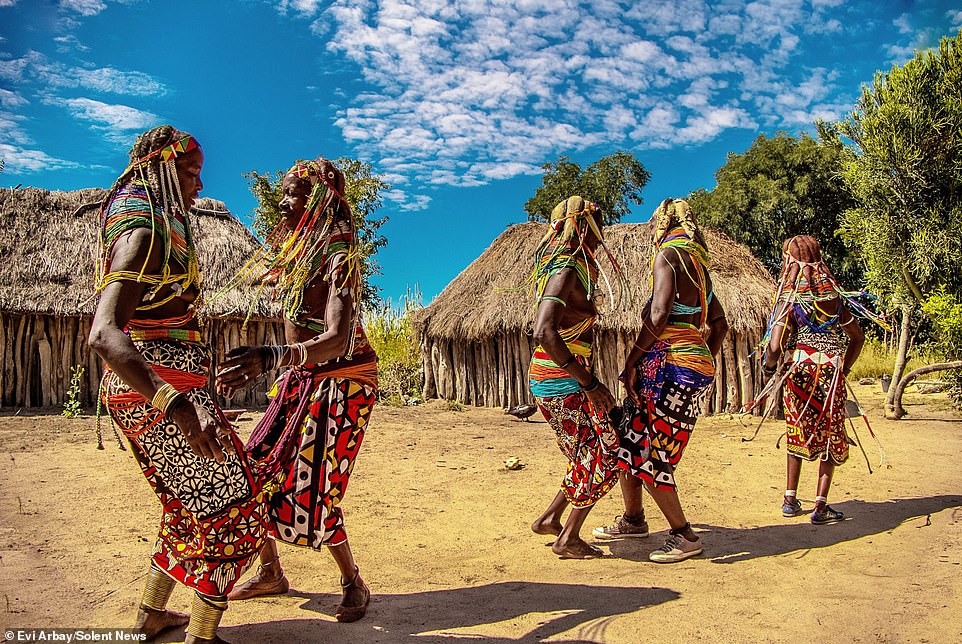 The Mwila are also known for their dresses, which feature loud colour schemes and eye-catching patterns. They are either tied around the waist or around the shoulders 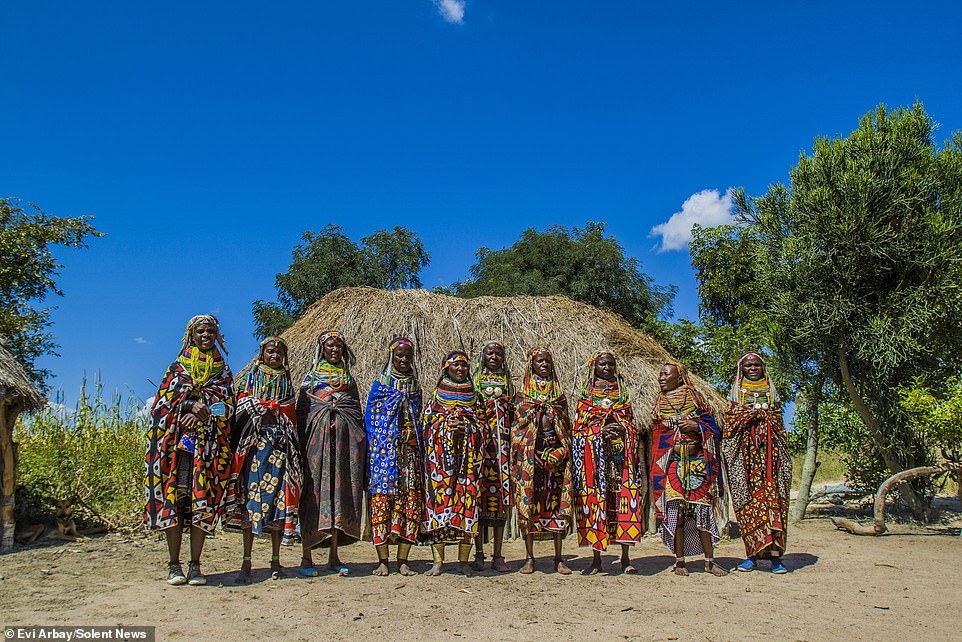 While the fashions of the Mwila are meant to be striking, they also serve important symbolic purposes, indicating the difference between girls and women

The women are also expected to wear huge necklaces, made from a mixture of mud and beads, which they keep on at all times – including while sleeping.

While Mwila styles are designed to be striking, the dress codes also act as important symbols, telling viewers about the women and their lives.

The number of braids in their hair – usually between four and six – denotes whether they have reached maturity, but three braids indicates there has been a death in their family.

Necklaces are also used as a means of demonstrating sexual maturity, with young women wearing smaller necklaces, usually of red or yellow.

As they grow older, more coloured bands of beads are added, indicating different stages of life.

Specialist tour operator and photographer Evi Arbay was taking a group of Indonesian tourists on a tour of Namibia and Angola when she captured the photographs of the Mwila tribe. 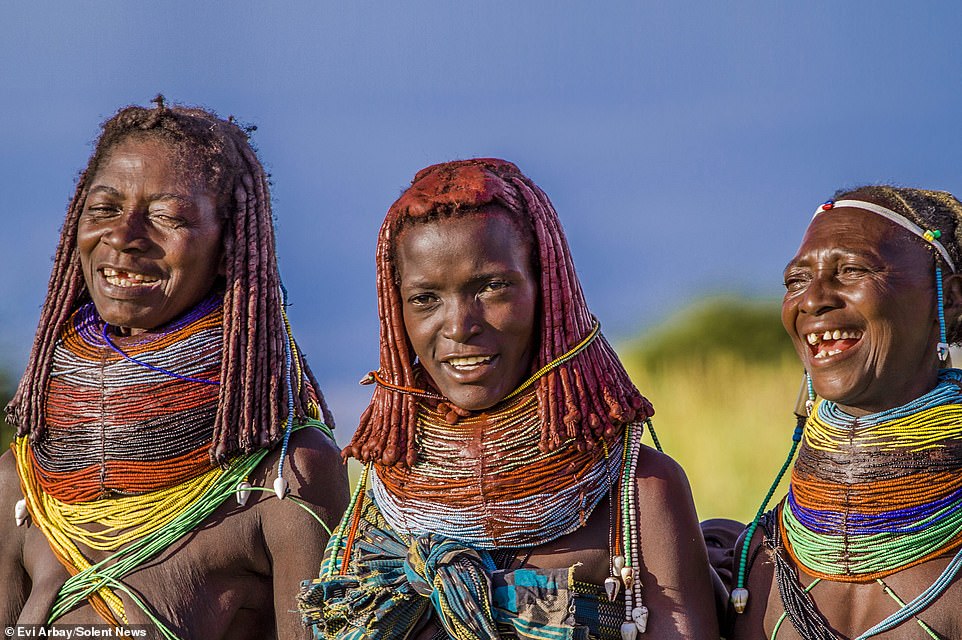 While young girls often wear small necklaces in red and yellow, older women add stripes of various colours, indicating different stages in their lives that they have passed through 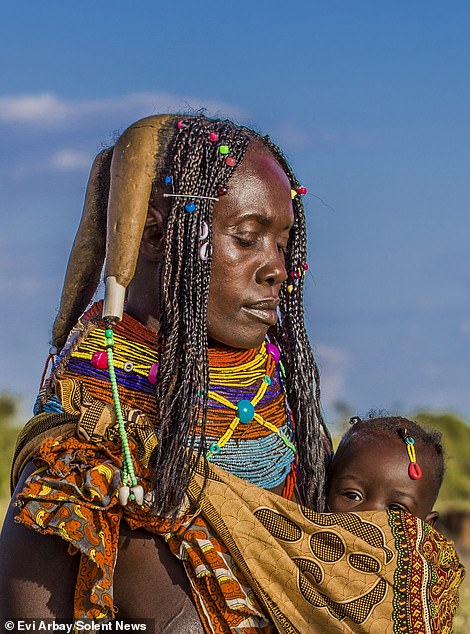 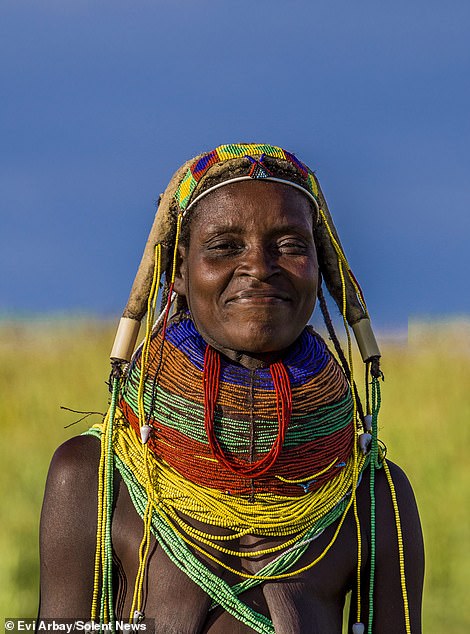 Mwila hairstyles also represent important parts of a woman’s life. Girls and women wear between four and six braids, depending on their age, but three braids means there has been a death in the family 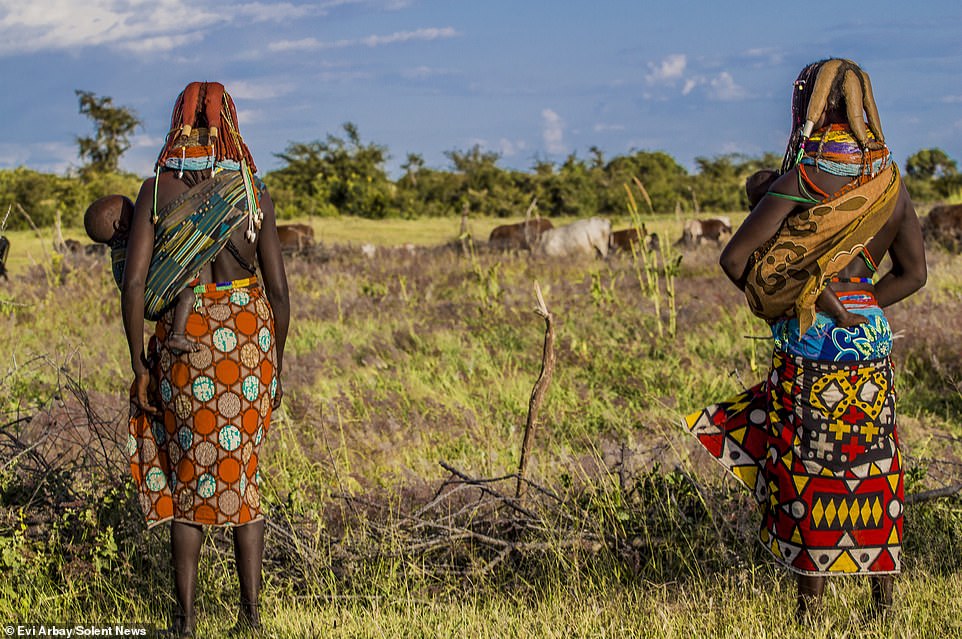 The Mwila people are semi-nomadic, meaning they build homes, farm some crops and keep animals, but often move around in search of better grazing for them or to hunt 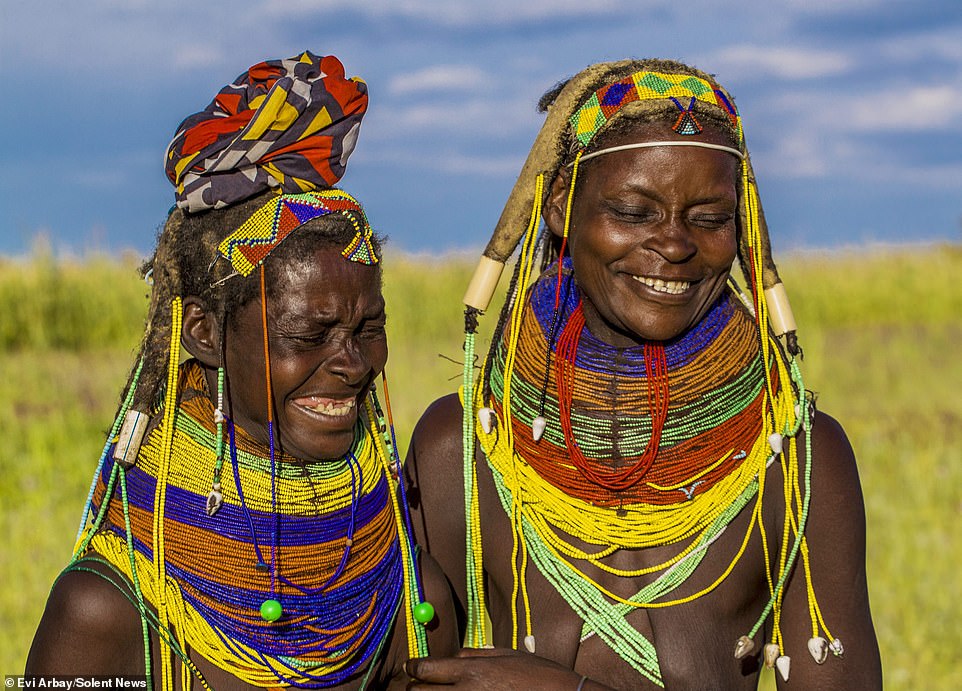 Because the necklaces and hairstyles take so long to create, women wear them all the time – including while sleeping. Special head-rests are often used to stop the hair from being damaged 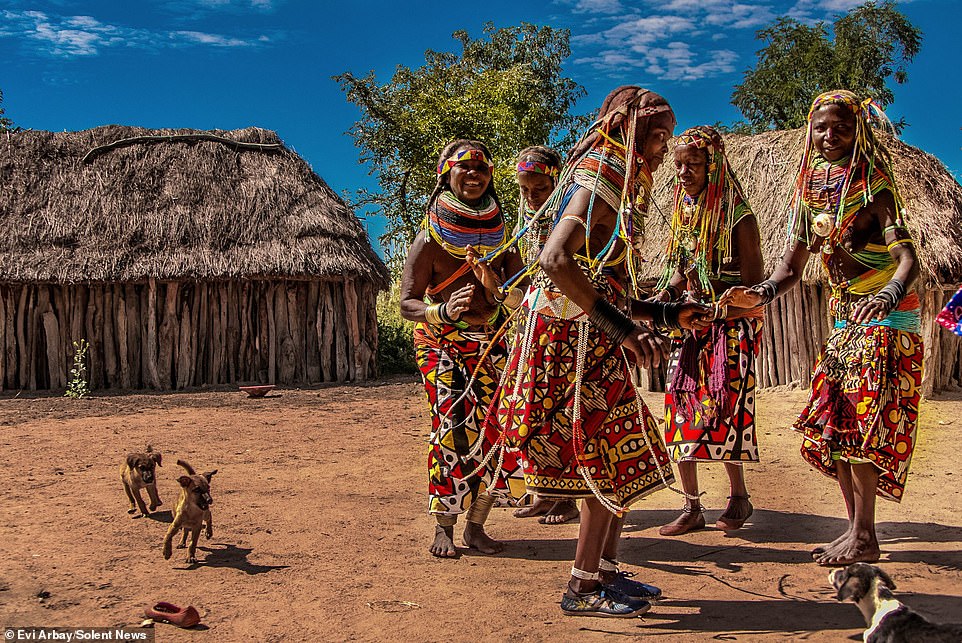 Evi Arbay, a specialist tour operator and photographer, captured these images while taking a group of Indonesian tourists around the southern province of Huila, in Angola

The 38-year-old met the tribeswomen in the Huila Province of Southern Angola.

Ms Arbay, of Jakarta, Indonesia, said: ‘On the tours we love to meet special people wherever we go and this encounter with the Mumuila people was a special thing.

‘The women we met are strong and hard working, in some places I saw them work harder than the men.

‘The colours in their hair, their necklaces and the unique way they dress is how they keep their tradition alive.

‘They coat their hair with a red paste, called oncula, which is made from crushed red stone and also put a mix of oil, crushed tree bark, dried cow dung and herbs on their hair.

‘Mumuhuila women are also famous for their mud necklaces, which are important as for each period of their life corresponds a specific colour of necklace.’