In the tunnels under New York, commuters squeeze into lumbering trains and try not to make eye contact with the people whose sweaty bodies are pressed against theirs. As they surrender to the will of the transit authority, their eyes wander upward to find an unlikely promise of control: Many cars are plastered with ads that say “Balding is now optional.” These ads feature men in various states of elation. The men all have hair—and not simply the errant tufts that have appeared for years in infomercials for “hair restoration.” No, this hair comes in the form of thick, leonine coiffures.

The ads are for a company called Hims, an online seller of the drugs finasteride and minoxidil (known by the trade names Propecia and Rogaine). The marketing copy implies there has been some sort of breakthrough in the science of hair loss. But Propecia and Rogaine have been available for decades. They have proved modestly effective at slowing hair loss, but they cannot entirely prevent or reverse it. Even for people who can afford $44 a month for the company’s hair-loss-drug package, balding is still not “optional.” 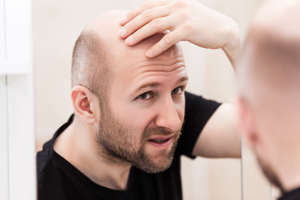 The physiology of balding has long vexed even the most entrepreneurial of scientists. Despite a rare confluence of commercial forces and scientific interest, generating new hair remains outside the realm of the possible. This could be changing, though—and not owing to new packaging of the same old medicines. Recently a series of scientific publications has explored advances that involve both stem-cell research and 3-D printing, with the goal of cloning a person’s actual hair and then inserting it into his or her scalp—in tremendous, unlimited quantities. 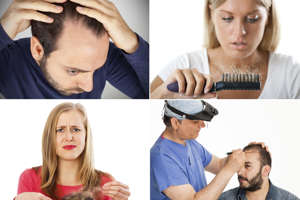 “For a long time, we’ve been saying this is 10 years away,” says Robert Bernstein, a dermatologist in Manhattan who specializes in hair transplantation. “But now it actually might be less.”

Of all the parts of the body to create in a lab, hair could seem like the simplest. It’s a strand of protein filaments wrapped around one another. Hair doesn’t have to “function” in the way of a liver or brain; it just has to sit around and grow and not fall out.

But hair is much more complex to make than many researchers initially expected. To produce a single, hardy strand, the body relies on thousands of stem cells called dermal papillae at the base of each hair follicle. Human scalps contain about 100,000 hair follicles, but their life spans are limited: As dermal papillae disappear over time, follicles “miniaturise” and become dormant. (In this way, a bald person’s head still has hair, technically, but only in wiry strands that are the result of dormant follicles with only a few hundred dermal papillae.)

When a hair follicle goes dormant, it cannot be restored. So any ads for hair “restoration” that you might see are actually ads for surgical transplantation of hair follicles—taking hair from one part of the scalp and moving it to another. The procedure can cost about $10,000, and its results are limited by how many vital hair follicles a person has available to move. 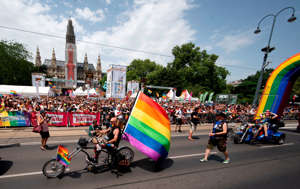 Doctors in some parts of the world will move a person’s body hair (back or underarm) onto his or her head, but most surgeons agree the aesthetic outcome is not pleasing. Conceivably, a person could have someone else’s hair put onto their own head, but that would require a blind eye to the ethics that prohibit the purchase of human organs.

The answer, then, lies in generating new hair. This science is progressing alongside the creation of other bodily structures in what is known as cell therapy, a promising area of medicine in which therapies are derived from a person’s own stem cells. Pancreatic cells could replace those that stopped producing insulin in people with type 1 diabetes. Immune cells could be used to attack tumors. Nerve cells could be used to repair spinal-cord injuries. And, of course, hair follicles could be used to cover hairless skin. Using cells from a person’s own body minimizes the risk that the immune system will reject the hair transplants (as happened to Arrested Development’s Dr. Tobias Fünke).

The ultimate goal among scientists is to create “hair farms,” as the entrepreneur Geoff Hamilton and others put it. Hamilton is the CEO of Stemson Therapeutics, a San Diego–based start-up that is working on cloning hair follicles. It involves growing hair from stem cells—not fetal, but stem cells derived from a person’s own skin or blood—and implanting hair follicles rich with dermal papillae into the space around a person’s old, shrunken, dormant follicles.

Last month at the annual meeting of the International Society for Stem Cell Research, Hamilton recounted successfully transplanting human hair follicles into mice. Images he shared with me showed a small tuft of doll-like hair sticking off the back of a mouse—a distant cry from the luminous manes on the subway.


These results are not necessarily long-lasting. “When you try to clone hair cells, over time they dedifferentiate and stop producing hair,” says Bernstein. “For a long time, no one could figure out why.” But researchers gradually solved the problem. Over the past few years, they noticed that cells spread out when they’re cultured; the follicular structure essentially melts away. “The epiphany was that if you can keep the cells together in their teardrop shape so they continue to signal each other, they continue to grow into hair follicles,” Bernstein says.

The shape of the follicle is also necessary just for keeping the hairs growing in the same direction. Hamilton’s colleague Alexey Terskikh learned this a few years ago, when his lab cloned human hair follicles and transplanted them into mice—only for many of the hairs to grow inward or sideways. Those that did sprout through the skin came out at all different angles. “Simply putting the follicle in the skin means a lot of ingrown hairs and lots of weird directions,” says Hamilton. Even slight differences in angle make hair look deeply unnatural.

This discovery has launched a global arms race to generate sustainable hair follicles that will hold their shape. At the meeting last month, Hamilton’s group proposed one solution. It involves a synthetic scaffold, which Hamilton will describe only as proprietary. The scaffold would be implanted around the cloned follicle to direct the growth of the hair. Stemson Therapeutics recently partnered with the pharmaceutical giant Allergan to develop this scaffold for cloned hair, and Hamilton says they expect to start a clinical trial in humans in about a year and a half.

Related: 14 reasons why you could be losing your hair (Popsugar)

Meanwhile, Angela Christiano, a professor of genetics and dermatology at Columbia University, has used 3-D printing to generate a Jell-O mold that holds the follicle and dermal papillae in place as they differentiate into hair. Christiano reported the results in the journal Nature Communications last December, writing that the ability to regenerate an entire hair from cultured human cells “will have a transformative impact on the medical management of different types of alopecia, as well as chronic wounds.”

Christiano, who has an autoimmune disorder that caused her body to attack the hair cells on her head, notes that though much attention around hair loss is paid to men, some 30 million women in the United States experience thinning of their hair.

Bernstein believes the idea of a biodegradable synthetic guide is the most promising approach out there. “It’s a huge breakthrough,” he says. “There are many other factors that have to be worked out, but this certainly is really exciting.”

At least for the people who can afford it. A head of hair has long been among the few things money can’t buy—a system beyond the control of rich and poor alike. Creating new hair for a person, follicle by follicle, in bespoke 3-D printed scaffolds, stands to be exorbitantly expensive. As the technology develops and the costs decline, hair regeneration will never be widely affordable. Even a wealthy country like the U.S. struggles to provide basic medical care for tens of millions of citizens. Balding could become “optional,” but only for the people with the means to make it so.