Skip to content
You are here
Home > Fattening Food > Sanaya Irani on being ‘genetically thin’: ‘I used to eat fried food to look healthy, my parents were worried about me’


TV actor Sanaya Irani has revealed she struggled with her body image as she is too thin.


© Provided by HT Digital Streams Limited
Sanaya Irani has revealed that she is afraid of wearing sleeveless dresses as her arms are too thin. ()

Sanaya has recently transitioned to the big screen with Ghost, has worked in several hit TV shows including Iss Pyaar Ko Kya Naam Doon and Rangrasiya.

Speaking with Pinkvilla in an interview, Sanaya said, “Genetically, I am thin. Everyone thinks that it is a blessing to be thin and it is, today at this age I can say it is a blessing but when I was younger, I was very conscious. I was so thin that I needed to eat the wrong things to keep my weight. I used to have jars of Nutella. I had chips stuffed in my cupboard. I used to eat fried food to look healthy. I used to lose so much weight that I used to be conscious of my body. My arms so naturally thin that I used to conscious of wearing sleeveless clothes. Till today, I wear sleeveless things, I wonder if I am looking too thin. At times, my own parents were worried about me if I am okay.” Sanaya, who made her foray into acting with Rajiv Khandelwal’s Left Right Left , went on to impress viewers with shows such as Miley Jab Hum Tum.

Thanking Vikram Bhatt for her role in the film Ghost, Sanaya wrote on Instagram, “Simran Singh a character which will always be close to my . Thank you @vikrampbhatt for believing i could be the hero of your film , thank you for the learning i got from this film . Like someone told me after watching the film, that i couldn’t have asked for a better show reel . All an actor ever wants is a character that gives them scope to perform and Simran Singh did just that for me . Thank you once again @vikrampbhatt … like you said i have a long journey ahead and i cannot wait to embark on it . #ghost #ghostthefilm in theatres near you .”

Talking about her career so far, Sanaya had told Hindustan Times earlier, “I have been very lucky in terms of the kind of work I have got and done, and not in the sense that those things (eventually) worked out well for me. As an actor, I pretty much got what I wanted, every role being different from the other. That all the shows worked out for me is the icing on the cake.”

In pics: Star couples who met on set 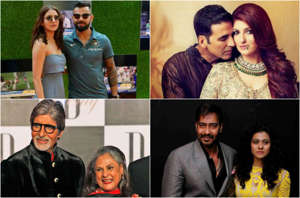