Personal trainer Sophie Allen has revealed how you can really burn fat fast after she transformed her own body in a matter of months.

The 29-year-old, from Melbourne, said the most frequently-asked-question she gets is about fat loss after she successfully toned her physique within months.

While most dieters know calorie deficit is important for fat loss, there are simple things you can do to achieve your weight goal.

Taking to her blog Soph Active Life, the fitness expert explained that in order to lose body fat, we need to be expending more energy rather than consuming calories.

‘We need to exert more energy through exercise and daily activity than food consumed. This is called being in a caloric deficit,’ she said. 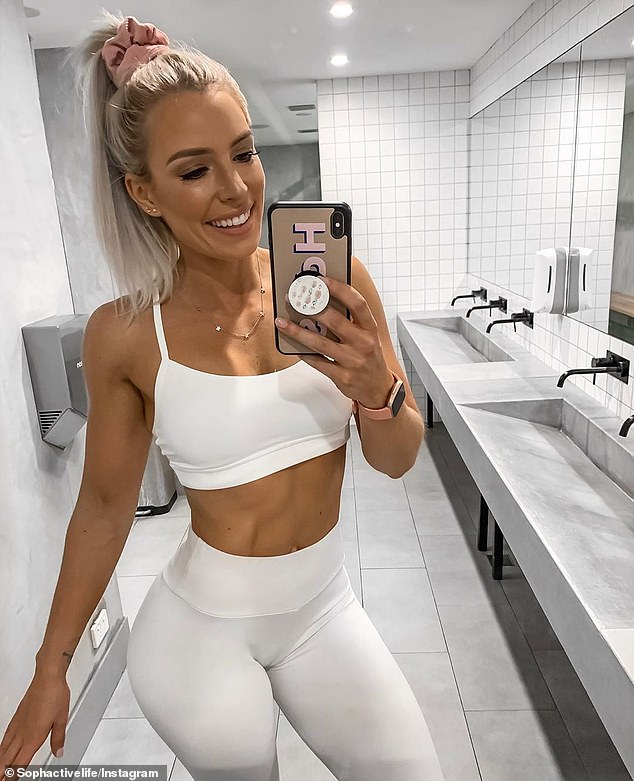 The 29-year-old, from Melbourne, said the most frequently-asked-question she gets is about fat loss after she successfully toned her physique within months

Sophie’s day on a plate:

Lunch: A Lebanese-style dish with hummus, rice, lamb, chicken and a mixed salad

‘But for the novice trainer, a better approach is weight training and eating in a caloric deficit – less food than required to maintain our current body weight,’ she said.

For those struggling to lose fat despite sticking to a caloric deficit and training hard, Sophie said you are experiencing the ‘activation of your body’s defence system’.

‘Our metabolism slows to prevent starvation, hunger increases and we become better at storing fat rather than burning it,’ she said.

‘What was once a caloric deficit for us, has now became the calories our body neither loses nor gains weight on. We need to create another deficit – either by increasing energy output – training, steps, physical activity – or eat less food.’ 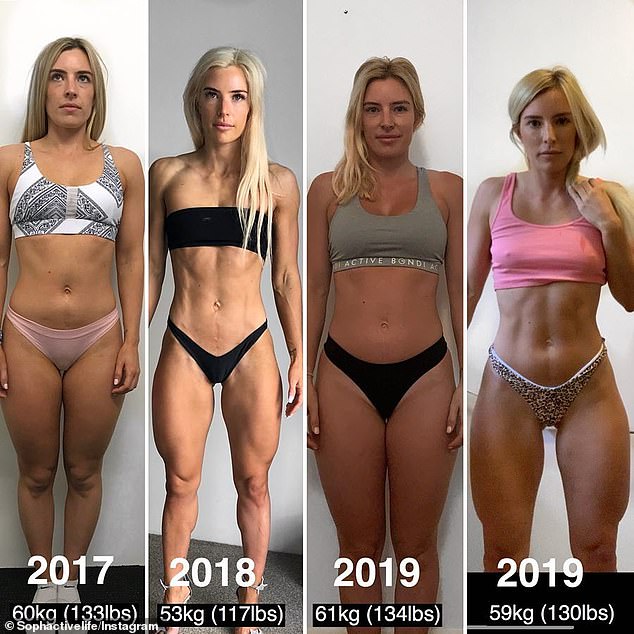 The fitness expert explained that in order to lose body fat, we need to be expending more energy rather than consuming calorie 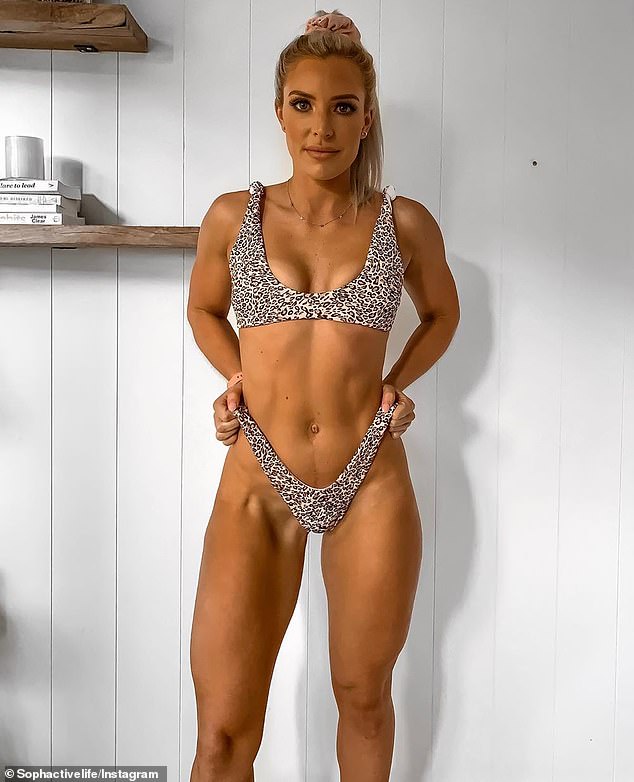 She said the best way to monitor your caloric deficit is through body measurements, body fat measurements, taking before and after pictures, and weight scale

She said the best way to monitor your caloric deficit is through body measurements, body fat measurements, taking before and after pictures, and weight scale.

Sophie said the best approach for fat loss is to start small with calorie intake and exercise before you increase.

‘As your metabolism adapts, you can either increase training, or decrease calories slightly as well as implementing diet breaks – bringing calories back up to initial maintenance calories through increased carb intake for a minimum of three days to reduce the negative adaptations that occur from eating in a deficit,’ she said.

But at higher levels of activity, Sophie said calorie burn can reach a plateau – a state of little or no change after a period of exercise or progress.

‘When we plateau, a lot of people lose motivation and tend to over-eat or reduce training and movement,’ she said.

‘Rather than doing less which is going to do the opposite to your results, this is when it’s more important to stay consistent and break through the plateau by making a change.

‘Don’t sabotage your hard earned results, be smart about it and continue to achieve what you set out by understanding how our body responds to what we’re doing to it.’

In June, Sophie shared a remarkable body transformation after she slimmed down to 57kg just by eating 1650 calories daily and training three and a half days a week. 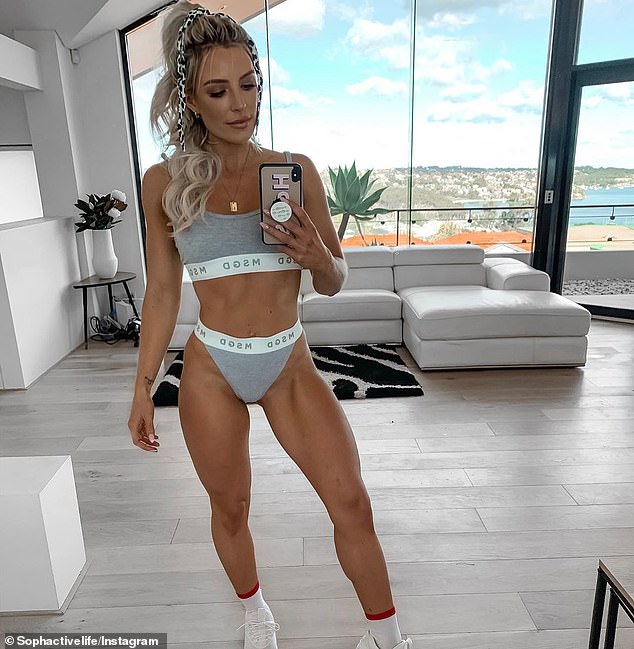 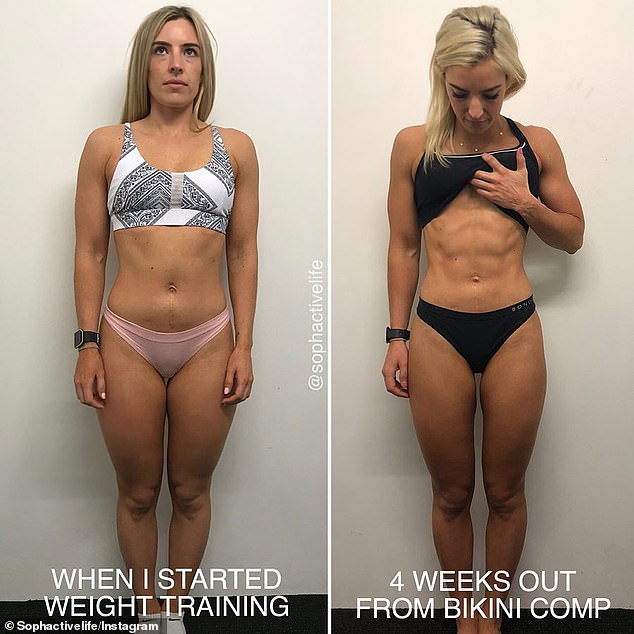 Sophie is known for sharing her body transformations on Instagram to her 247,000 followers

She shared a side-by-side image showing herself in January weighing 61kg after training four times a week and eating between 1,700 to 2,600 calories daily.

‘I was convinced I wouldn’t rebound… one small decision led to the next and that became a habit which is how I got to my January physique, 8kg heavier than stage weight,’ she said in June.

‘I was unhappy with myself because I felt out of control of my eating habits  and unsure why. I attempted a dieting phase… but mentally and physically I just wasn’t ready. I lost some weight but I didn’t enjoy the process.

‘I’ve now spent the first half of the year building some serious strength, eating consistently at maintenance calories.

‘Whilst the key to any fat loss phase is a calorie deficit, there are also processes that mean your body is in more of an optimal place for fat loss.

‘In my experience when this is the case fat comes off faster on higher deficit calories, it’s a lot more enjoyable. That’s where I’m at now.

‘I train with intention and purpose, I track my weights to ensure progression – key to muscle growth, I track my food consistently. I still go over calories sometimes but I’m getting better at understanding my process and my why, I love this process, it’s challenges and lessons along the way.’