By Ben Spencer Medical Correspondent For The Daily Mail

KFC has repeatedly attempted to move away from fried food but abandoned the project because sales of healthier alternatives were so bad, the company has admitted.

The fast food giant spent £8million installing ovens in its outlets so it could start selling baked and grilled meals, rather than the fattier deep-fried meals for which it is famous.

‘It didn’t go brilliantly well. We tried and we failed to launch a non-fried product,’ said Jenny Packwood, head of brand engagement at KFC UK and Ireland.

The fast food giant spent £8million installing ovens in its outlets so it could start selling baked and grilled meals, rather than the fattier deep-fried meals for which it is famous

‘We were unable to sustain sales. They were just not selling,’ she told Public Health England’s annual conference in Warwick.

‘It’s no good launching a product which looks good nutritionally but then nobody buys.

‘It doesn’t improve the health of the nation and in terms of sustainability it is a disaster.’

The firm has also tried to make its French fries healthier – by making them thicker, meaning there is a lower surface area to soak up oil – resulting in an 18 per cent reduction in calories and 12 per cent in fat.

‘Frankly it has been controversial and we get a lot of grief about our fries,’ she said.

The company has had more success with a healthy rice box, which includes a single piece of fried chicken surrounded by salad and rice, coming in at less than 500 calories.

‘It’s giving people a little bit of what they love but wrapping it in something healthier.’

She described the best tactic as a ‘health by stealth’ approach – gradually removing fat, calories and salt so customers do not notice.

KFC’s experience could be a bad sign for Public Health England’s plan to set voluntary calorie caps on all meals served in restaurants and supermarkets, as part of its attempts to combat obesity. 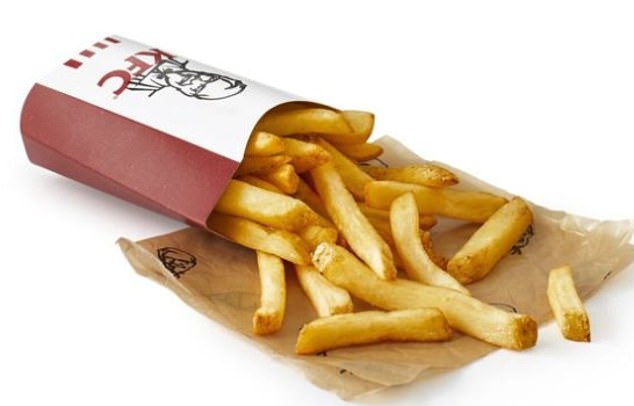 The firm has also tried to make its French fries healthier – by making them thicker, meaning there is a lower surface area to soak up oil – resulting in an 18 per cent reduction in calories and 12 per cent in fat 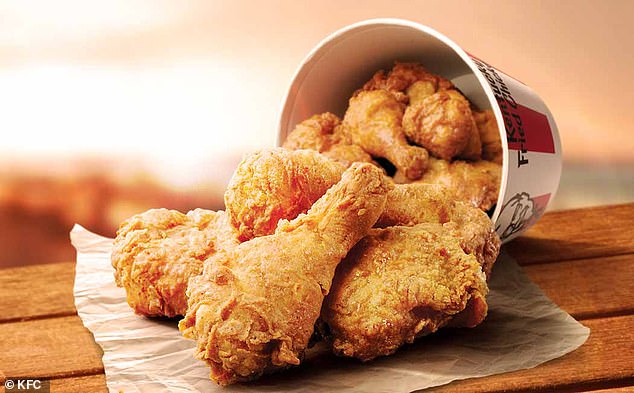 KFC’s experience could be a bad sign for Public Health England’s plan to set voluntary calorie caps on all meals served in restaurants, as part of attempts to combat obesity

Tesco group quality director Sarah Bradbury, also speaking at the conference, said the chain saw plummeting sales of its own-brand tomato soup when it reduced salt 15 years ago in response to Government targets.

‘Overnight they stopped buying our soup,’ she said.

‘We had to put salt back in, and then slowly take them along the journey, and over the 15 years we have taken 40 per cent of salt out.

‘But it is slow burn to ensure that we take customers’ palates with us as we do it.’

She said she was not surprised that KFC’s attempts to introduce healthier products had not worked, because people who eat there are not likely to be seeking out healthy food.

But Dr Tedstone said she was encouraged by the chain’s decision to stick with the altered fries.

‘A small change in chips could have a massive effect,’ she said. ‘The heart of this project is changing the “everyday” product.

‘You get to the bog standard person who is coming in to buy chips, rather than the health-seeker, who may be doing something different.’

HOW IS THE GOVERNMENT TRYING TO STOP OBESITY?

Proposed plans to restrict the number of calories in pizzas, pies and ready meals comes were last year revealed as part of drastic Government moves over the past year to try and cut down on obesity.

A tax on added sugar in drinks came into force last April, requiring companies to hand over more of the money they make from drinks which contain more than 5g of sugar per 100ml of liquid.

As a result, many soft drinks have had their recipes changed in order to avoid paying the tax and putting prices up. Sugary drinks are the biggest single source of sugar for children and teenagers.

The Government is also considering making it compulsory for all restaurants and fast food outlets to display the number of calories in each meal on their menu.

Some food outlets already do this but there can be unexpected numbers of calories in popular dishes, and the Government is consulting on the plans before a decision is due in spring.

In March this year, Public Health England warned Brits to crack down on the number of calories they’re eating, advising people to consume no more than 1,600 per day.

The watchdog says adults shouldn’t eat any more than 400 calories for breakfast, 600 for lunch and 600 for dinner – this would allow for some snacks, experts said.

In the same announcement PHE said shops selling the food should cut down their portion sizes to help people slim their waistlines.

Plans are also being considered to ban advertising junk food on television before 9pm, to reduce the number of children who are exposed to it.