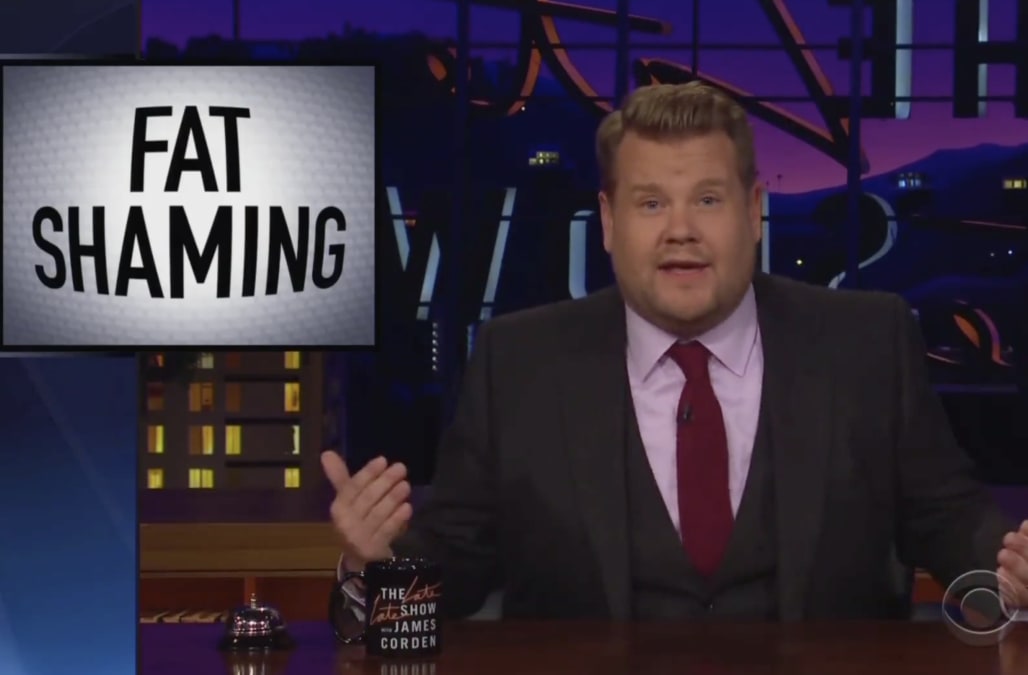 James Corden is going viral for a new body-positive segment in which he called out a fellow talk show host for fat-shaming.

The host of “The Late Late Show” used part of Thursday night’s episode to address comments made by Bill Maher on his show “Real Time.”

“Fat isn’t a birth defect,” Maher said on the program last Friday. “Nobody comes out of the womb needing to buy two seats on the airplane. Fat-shaming doesn’t need to end. It needs to make a comeback.”

Corden told his audience he saw the segment and realized “Somebody needs to say something about this,” so he decided to speak out.

“Fat-shaming never went anywhere. Ask literally any fat person, we are reminded of it all the time,” Corden said.

The “Carpool Karaoke” star went on to address Maher’s claim that “some amount of shame is good,” questioning the effectiveness of “bullying” people into changing their bodies.

“If making fun of fat people made them lose weight, there’d be no fat kids in schools,” Corden said. “And I’d have a six-pack right now.”

Corden told viewers he’d always struggled with his weight. The 41-year-old added that he’s been on and off of diets for as long as his entire career.

“There’s a common and insulting misconception that fat people are stupid and lazy, and we’re not. We get it, we know,” he said Thursday. “We know that being overweight isn’t good for us, and I’ve struggled my entire life trying to manage my weight and I suck at it.”

Bill Maher has stirred controversy on other topics. Last month, he said on his show he was “glad” that conservative businessman David Koch was dead, adding that he hoped “the end was painful.”

He’s also been locked in a feud with Rep. Rashida Tlaib, who recently suggested that people boycott his show.

Corden didn’t call for a boycott, but he didn’t hold back on Maher either. First, he joked about ratings troubles facing both of their shows, but then his shots got more personal.

“We’re not all as lucky as Bill Maher, you know, we don’t all have a sense of superiority that burns 35,000 calories a day,” Corden said.

“While you’re encouraging people to think about what goes into their mouths, just think a little harder about what comes out of yours,” he added.

The segment resonated with a number of viewers, many of whom took to social media to share their support for Corden.

Corden has hosted “The Late Late Show” since 2015, after taking over from Craig Ferguson. He also stars in such movies as “Trolls,” “Peter Rabbit” and the upcoming “Cats” film.

Maher on deceased billionaire: ‘I hope the end was painful’