A new ‘healthier blue food colouring’ could be possible in the future thanks to a metallic fruit that uses fat and reflection to generate a nutritious blue colour.

Most foods lack the pigment needed to produce blue naturally, but researchers from the University of Cambridge found a shrub that uses a technique for generating the colour similar to that used by birds, beetles and butterflies.

The Viburnum tinus is an evergreen shrub widespread across the UK and Europe that uses fats or lipids in their cell walls to turn the fruits a striking metallic blue.

As well as being brightly coloured, unlike other blue fruits this one is also nutritious, according to the Cambridge team, who are working on recreating the process.

The unique phenomenon – the first time it has been seen in plants naturally – opens the door to a chemical free blue food colouring, said lead author Silvia Vignolini.

Vignolini, a physical chemist at the University of Cambridge, said there are lots of problems linked to food colouration, especially when it comes to the colour blue.

Her team plan to mimic the actions of Viburnum tinus to create a ‘true blue’ kitchen ingredient to replace those packed with synthetic chemicals.

Blue in plants is caused by an antioxidant called anthocyanin but it normally makes them red or purple – so ‘true blue’ is the rarest colour in flowering plants.

The study published in Current Biology found Viburnum fruits use fats, or lipids, lipids, in their cell walls to turn striking blue.

Miranda Sinnott-Armstrong, of the University of Colorado-Boulder, a co-author on the paper, said structural colour – as seen here – is common in birds and beetles.

‘But only a handful of plant species have ever been found to have structural colour in their fruits,’ the researchers explained.

‘This means V. tinus, in addition to showing a completely novel mechanism of structural colour, is also one of the few known structurally coloured fruits.’

Vignolini has been fascinated by the plants for a decade after stumbling on them in a friend’s garden in Florence – and observing they ‘looked weird.’

Her team eventually had the capability to examine the structure of the fruits under state of the art microscopes to find out what made them ‘weird’.

‘Before we got the images, we were just seeing all these blobs. When we found out those blobs were lipids, we got very excited,’ Vignolini said.

There are thousands of ‘blobs’ arranged in layers – that reflect blue light. The structure produces their colour – without any blue pigment.

The fruit of the V tinus plant use a novel mechanism of ‘structural colour’ to shine a bright metallic blue.

This makes it one of the few known structurally coloured fruits.

The lipid structures are present in the cell wall of the outer skin of the V. tinus fruit, below which lie a layer of dark red anthocyanin pigments.

Any light that is not reflected by the lipid structures is absorbed by the dark red pigment beneath, which prevents any backscattering of light.

This in turn makes the fruits appear even more blue.

Co first author Dr Rox Middleton, of the University of Bristol, said it was a very strange discovery as globular lips are not usually found in this arrangement.

‘They are normally stored inside the cell and used for transport,’ said Middleton.

‘We also believe this lipid may contribute to the fruit’s nutrition. That means the fruit can demonstrate how nutritious it is by being a beautiful, shiny blue.’

This extra nutrition would be important for V. tinus’s main consumers – birds that disperse its seeds and the colour indicates it is a worthwhile meal for the birds.

Vignolini said: ‘While birds have been shown to be attracted to blue fruits, other blue fruits that we have studied essentially don’t have any nutritional value.’

Most colours in nature are due to pigments but some of the brightest – such as peacock feathers, butterfly wings and opals – come from their internal makeup.

This is known as structural colour and the way the structures are arranged determines which colours they are able to reflect.

The colour is created by the interaction between light and matter.

Dr Middleton added: ‘Viburnum tinus plants can be found in gardens and along the streets all over the UK and throughout much of Europe.

‘Most of us have seen them, even if we don’t realise how unusual the colour of the fruit is.’

While most fruits have low fat content, some – such as avocados, coconuts and olives – contain lipids, providing an important, energy-dense food source for animals. 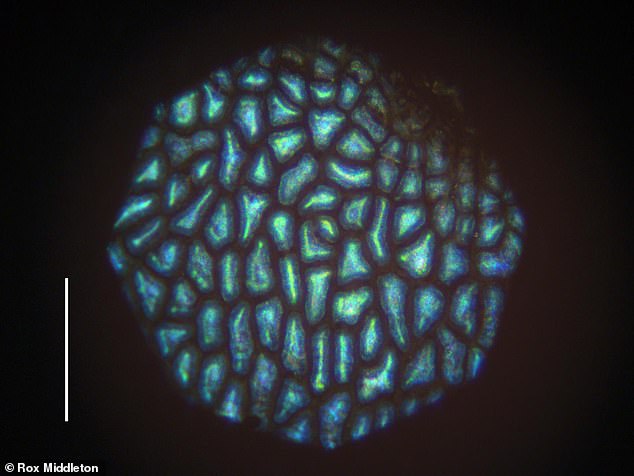 Most foods lack the pigment needed to produce blue naturally, but researchers from the University of Cambridge found a shrub that uses a technique for generating the colour similar to that used by birds, beetles and butterflies

This is not a direct benefit to the plant, but it can increase seed dispersal by attracting birds – so has an overall benefit in reproduction and spread.

One potential application for structural colour is that it removes the need for unusual or damaging chemical pigments – colour can instead be formed out of any material.

Vignolini said it was exciting to see the principle in action and in this case the plant uses a nutritious lipid to ‘make the beautiful blue shimmer’.

‘It might inspire engineers to make double-use colours of our own,’ she added.

Going forward, the researchers want to see how widespread blue structural colour is in fruits to understand its ecological significance.

They had never seen this type of lipid multilayer in a biomaterial before, but since their discovery, they’ve begun to take notice of other species.

“We actually realize now that there are some older electron microscopy pictures from other plants where you can see the blobs,’ said Vignolini.

The researchers didn’t know that they were lipids at the time, or that lipids could even form this type of structure, but the new study suggests they could be.

The findings have been published in the journal Cell Biology.