A determined father has achieved his New Year’s resolution of losing almost half his body weight in a year, after being fat-shamed online.

Neil James, 36, an application specialist from Grand Rapids, Michigan, decided to take action after a friend posted a photograph of him at nearly 322lbs (23 stone) and titled it ‘Fat Neil’.

On January 1st 2017, he started to reverse the toll that years of leading an unhealthy life had on him by starting a daily 15-minute exercise routine, and eventually working up to two hours.

Following the high-fat, adequate-protein, and low-carbohydrate keto diet, Neil cut sugar out of his diet and reduced his carb intake, achieving his goal of getting below 198lbs (14 stone 2lbs) within a year.

Father-of-one Neil James, 36, from Grand Rapids, Michigan, lost 140lbs (10 stone) in a year after being branded ‘fat’ online, and deciding to overhaul his diet and exercise regime for a healthier lifestyle -pictured at 322lbs (23 stone) at the beginning of last year

Neil incorporates intermittent fasting into his diet, eating an entire day’s worth of calories in one big meal such as steaks or ribs, then eating nothing else for the rest of the day.

Since then his body fat count has fallen to a 15.2 per cent, revealing chiselled abs and a shredded physique, which he says is down to his new diet and gruelling exercise regime.

Neil said: ‘Before this the only six-pack I had was from the liquor store, now it’s the first time in my life where I’m like ‘oh wow, there are abs down there’.

‘My triggering moment came when one of my friends, who I would play online games with, found an old picture of me super-overweight and called it ‘Fat Neil’.

‘I knew I was getting out of control and that was the nail in the coffin. 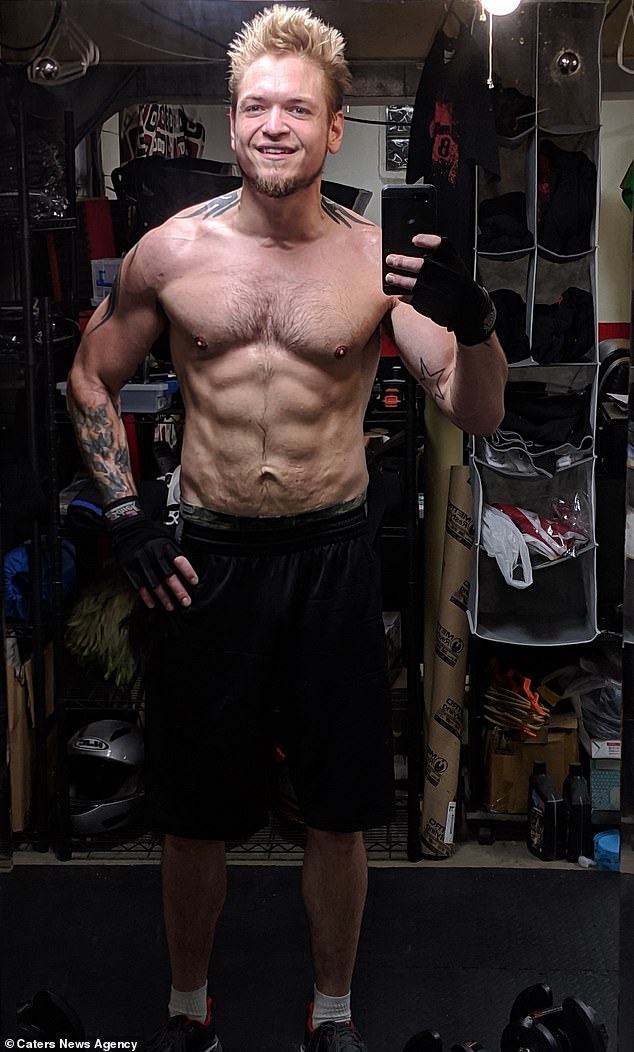 Deciding to overhaul his diet and exercise regime for a healthier lifestyle, he now weighs 179lbs (12st 11lbs) and has more energy for his family 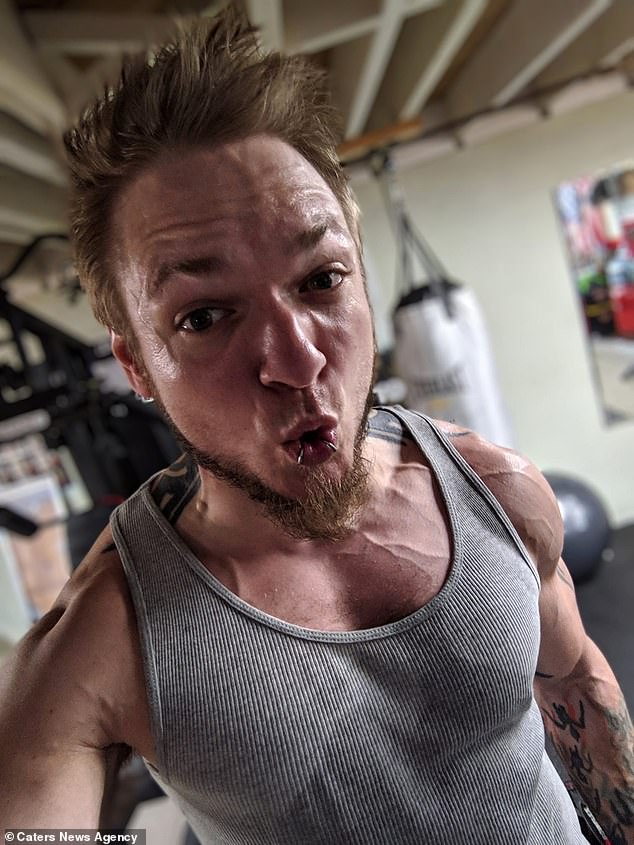 Neil says his shredded physique is down to intermittent fasting with keto and exercise, admitting that he has spent ‘thousands’ of hours exercising

‘After he posted it, I thought, ‘I’ll show you fat Neil’ and now two years later it’s like, ‘Look who’s fat now’.

‘It was around the time when I was thinking about losing weight, he was right I was fat, so weirdly it was a good motivator on top of how I was already thinking.’

He added: ‘I feel grateful for that post now, it was the straw that broke the camel’s back and pushed me to do something rather than procrastinating.

‘Recently I told him, ‘Thanks man, you’re the reason I’m jacked now’ and try to encourage him too.’

Neil said his weight fluctuated throughout his childhood until turning 21, the legal drinking age in the United States. 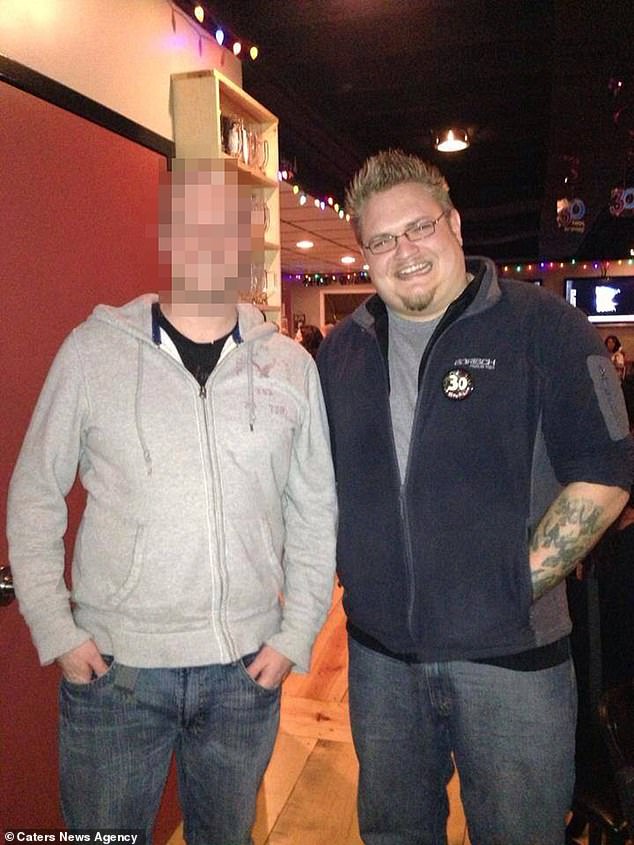 Pictured: The image in which he was referred to as ‘Fat Neil’, prompting his New Year’s resolution of weight loss – that would start on Jan 1st 2017 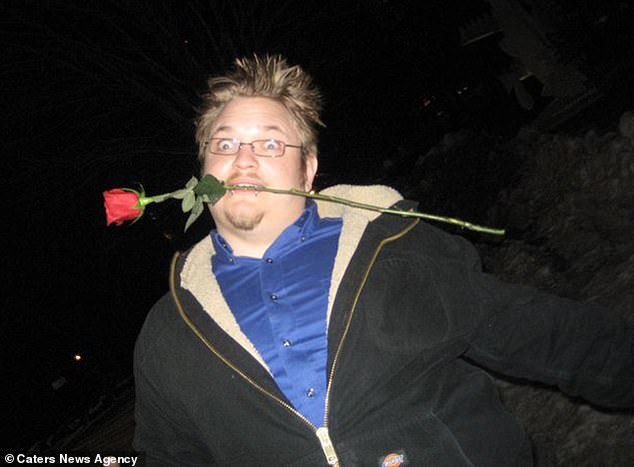 Pictured: At his heaviest Neil weight 320lb over 23st – and was called fat Neil online in a friend group which encouraged him to lose weight 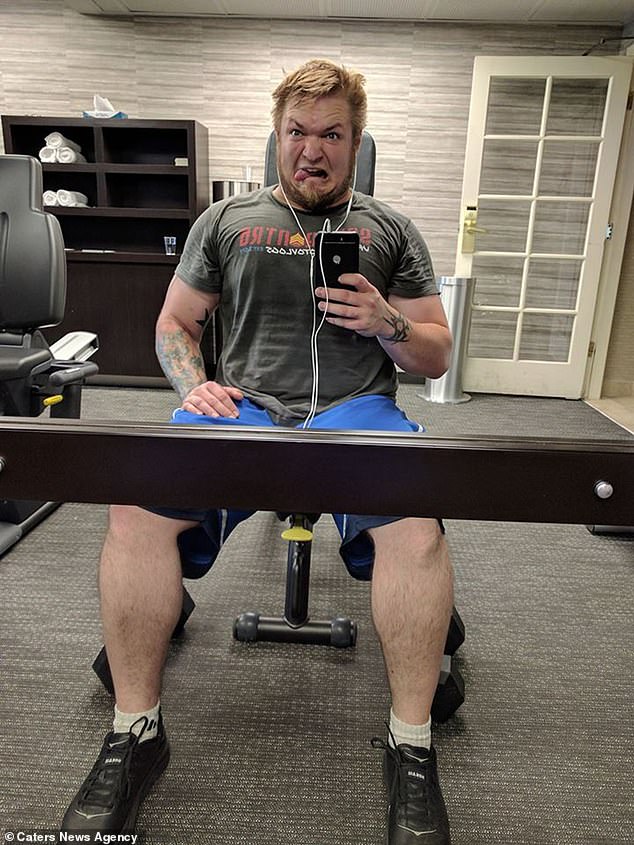 Pictured: Starting the workouts – At his heaviest Neil weighed 322lbs (around 23 stone) and he began with 15 minute daily workouts before increasing them to two hours

Neil believes socialising over the calorific craft beer led him to pile on the pounds – but with his increased weight gain also came depression and self-consciousness.

He added: ‘It took the entire of 2018 to reduce my body fat to be where I am right now.

‘Now when I look in the mirror, it’s like ‘wow’ but I know I really worked hard to get where I am.

‘I’ve worked so hard for two years to get where I am, this week alone I worked out twice a day for two hours each time.

‘It’s very humbling, I’m definitely proud as I have put thousands of hours into working out and committing to a restricted diet, changing my eating habits and way of eating. 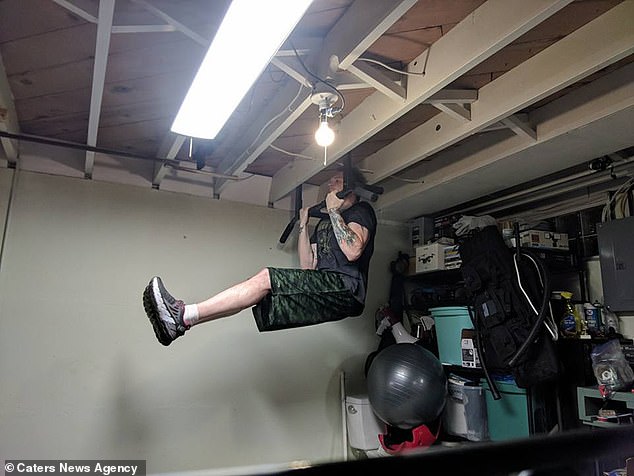 Seen: Neil showing off his workout that he does up for to four hours a day after years of an inactive lifestyle 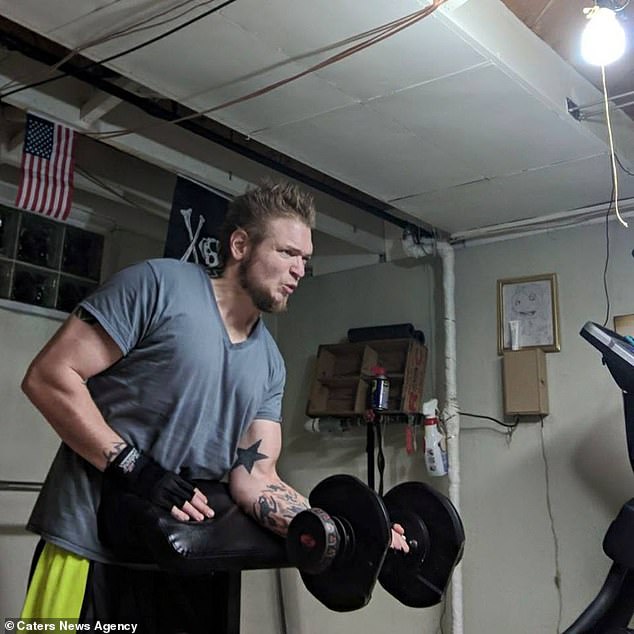 Neil incorporates intermittent fasting too, eating an entire day’s worth of calories in one big meal such as steaks or ribs, then eating nothing else for the rest of the day

‘Before, I was socialising, going out for a couple of beers after work, then not eating healthily, enjoying candy and pizza.

‘I started to feel depressed and self-conscious about my weight gain, it dawned on me that I needed to take better care of myself to be around for my son.

‘It was pretty much my New Year’s resolution from January 1st, I was determined to do it and to stick to it, now two years later I’m half the person I was.’

After hitting a plateau with his weight loss and unable to get lower than 252lbs (18 stone), Neil started researching intermittent fasting.

Initially he feared it sounded ‘crazy’ but after trying it, he soon became hooked and now gorges on massive meals once a day to consume his daily calories.

Outside of the allocated times he only has coffee, tea and water.

Now nearly half his body weight, Neil says his life has changed drastically in every way, and he has more energy to enjoy time with his son, as well as improved self-confidence. 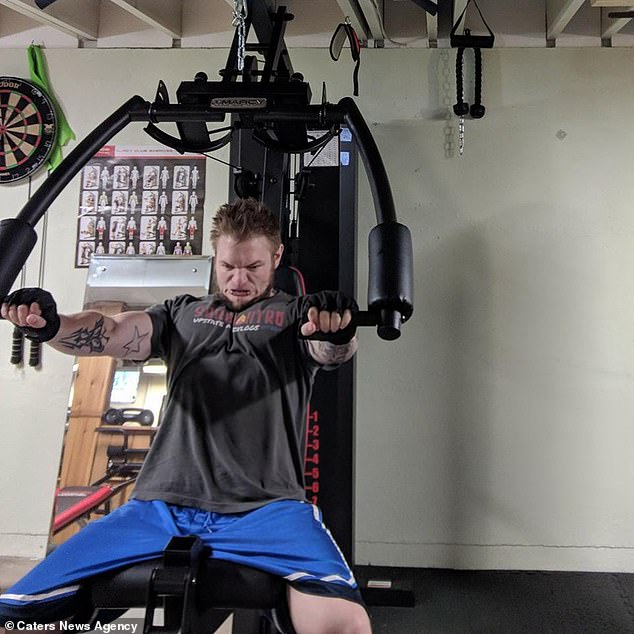 He recommends to others that all it can take is a few small lifestyle changes initially to start on the path to healthiness.

Neil said: ‘People believe you are starving yourself, but I don’t feel like that at all as I’m really not hungry.

‘I may have a steak with mushrooms, roasted cauliflower and salad, and I might have two servings, I just eat until I’m full then I know I’m good until the next day.

‘It’s satisfying and not just salad and cabbage, it’s fulfilling, I get full and am not constantly hungry.

‘I’m a whole different person, I’m so much happier and more outgoing, I can’t look back and imagine how I left myself feel that bad.

‘I’m proud of myself and thankful for the friends and family who supported and encouraged me to stick with it and keep going.

‘If you want to change your life just take that small step, small steps leave to big steps and can turn your life around.

‘It doesn’t have to be everything at once – in bad spots those small decisions can make a real change.’ 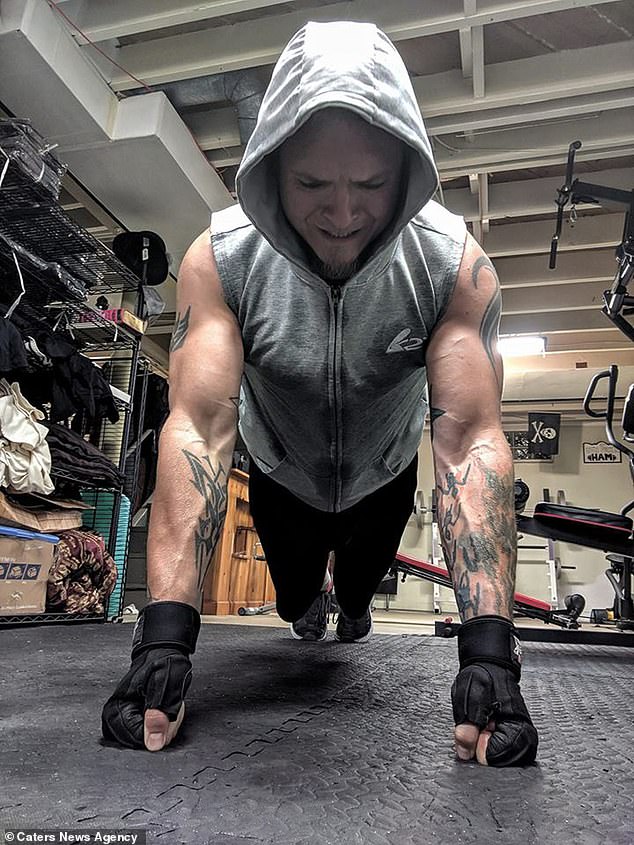 Neil showing his workout that he does up to 4 hours a day. He is now ripped after shedding almost half his body weight 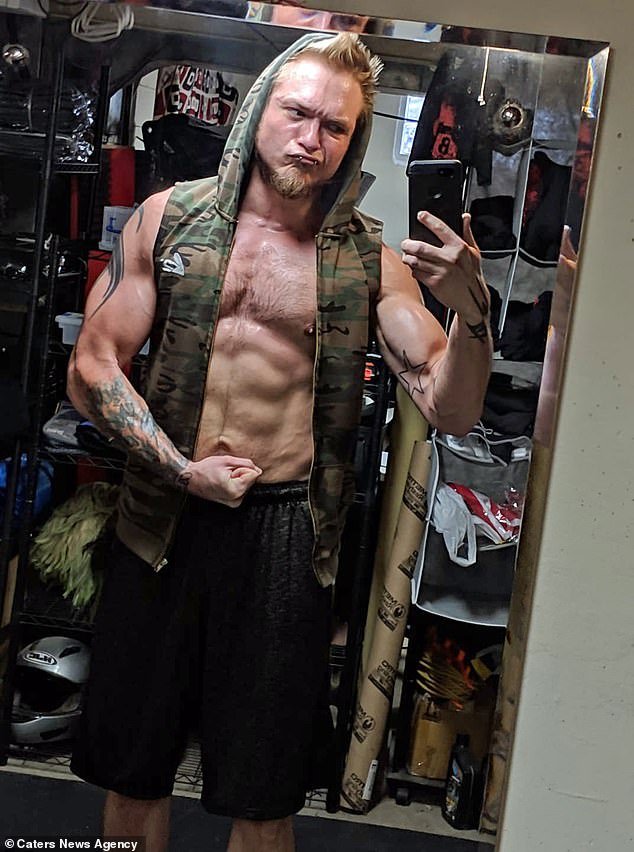