A dietitian has revealed what it really took for her to get abs, and why maintaining them long term is nearly impossible.

Leanne Ward, 30, from Brisbane, said she has got defined ab muscles in the past after ‘three or four months’ of hard work, but if you want to keep them, then the sacrifice is huge.

‘If your goal is visible abs, chances are you won’t be able to maintain it long term,’ Leanne posted on her Instagram alongside a photo of her in a bikini.

She added that she does ‘not look like this right now’, and so you shouldn’t necessarily strive for perfection as it is often an unattainable goal.

A dietitian has revealed what it really took her to get abs, and why maintaining them long term is nearly impossible (Leanne Ward pictured when she had abs) 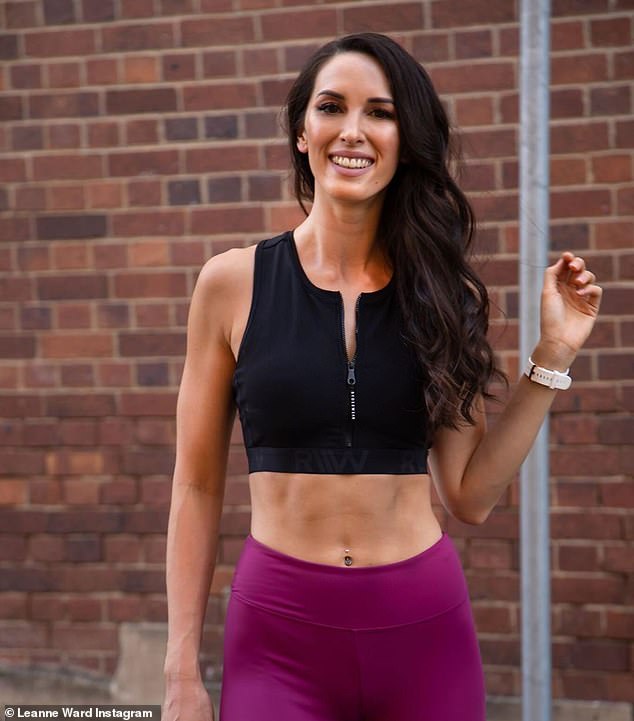 What is ‘cutting’ and ‘bulking’?

* Cutting means eating fewer calories than you burn in order to slim down.

* Bulking means eating more calories than you’re burning in a day to put on muscle mass.

* These terms are commonly used in the fitness industry by people who want to lose weight and put on muscle.

‘This photo was taken after a three-four month period of “cutting” in the healthiest way using wholefoods and on the highest possible calories,’ Leanne said.

The lowest amount of calories the 30-year-old dietitian said she reached each day was 1,550 calories – which is dangerously low for her six-foot frame.

‘I was so hungry every day I refused to cut lower, but for me, it was not maintainable,’ Leanne said.

She added that she wants her followers to know that ‘visible abs don’t always equal health or happiness’.

To get abs, Leanne revealed she hadn’t had ‘alcohol or a meal out in months’.

‘I was doing five or six gym sessions per week, walking 10,000 or more steps each day and tracking and weighed everything I ate,’ she said.

The daily gym sessions required Leanne to focus on different areas of the body each day, including arms and abs, chest and back and lower body.

‘If this doesn’t sound fun to you (because it really wasn’t), I’d urge you to consider the “goals” you have for yourself and think if the last 2-5kg is really worth it,’ the dietitian said. 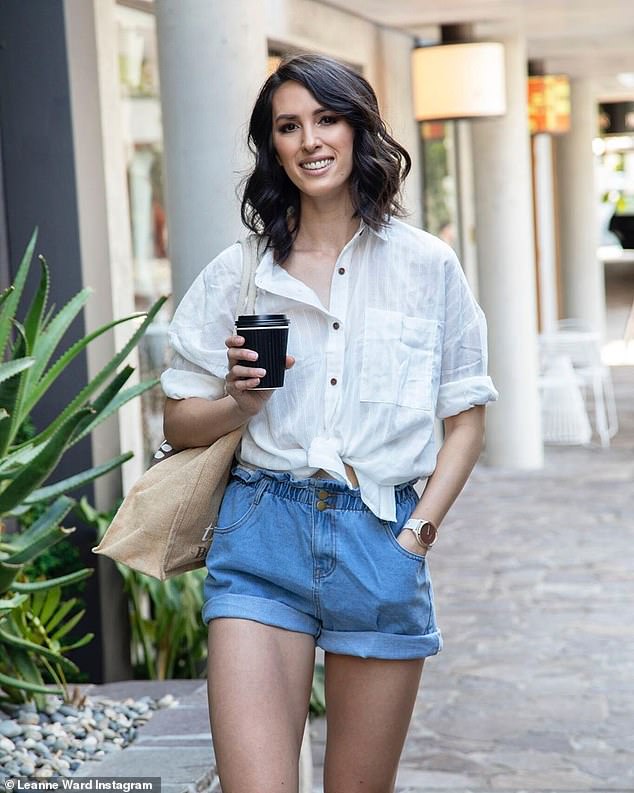 The lowest amount of calories the 30-year-old dietitian said she reached each day was 1,550 calories – which is dangerously low for her six-foot frame (Leanne pictured) 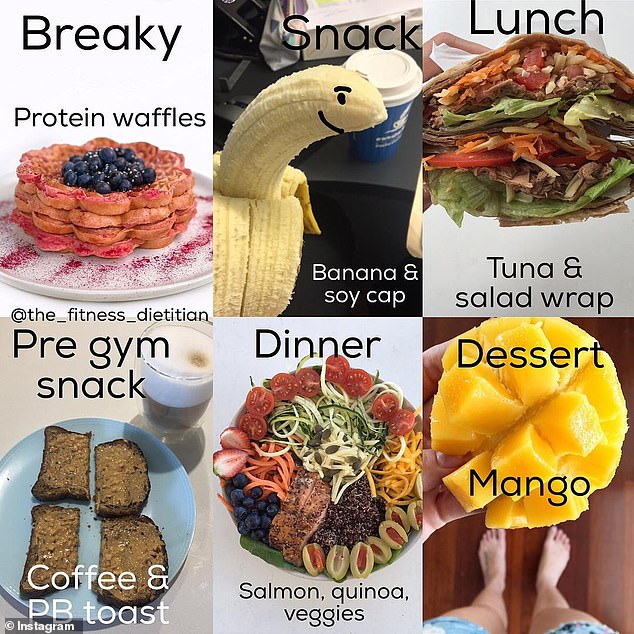 Nowadays, the dietitian said she favours a healthy and balanced day of eating with plenty of complex carbohydrates and snacks (a day on Leanne’s plate is pictured)

If you want to lose weight healthily, Leanne said you need to be thinking about eating in a calorie deficit.

‘You don’t need to do any crazy diet, you simply just need to be in a calorie deficit,’ she said.

This means eating fewer calories than you burn, whether you do this by cutting 100-200 calories per day or upping the intensity of your workouts.

‘Nutrition is king, exercise is queen and together they make a perfect kingdom,’ Leanne added.

‘For some genetically-gifted individuals, they can have abs without exercise, but the majority of us need a very low body fat percentage (nutrition on point) and resistance training combined with some sort of HIIT/cardio/steps.’ 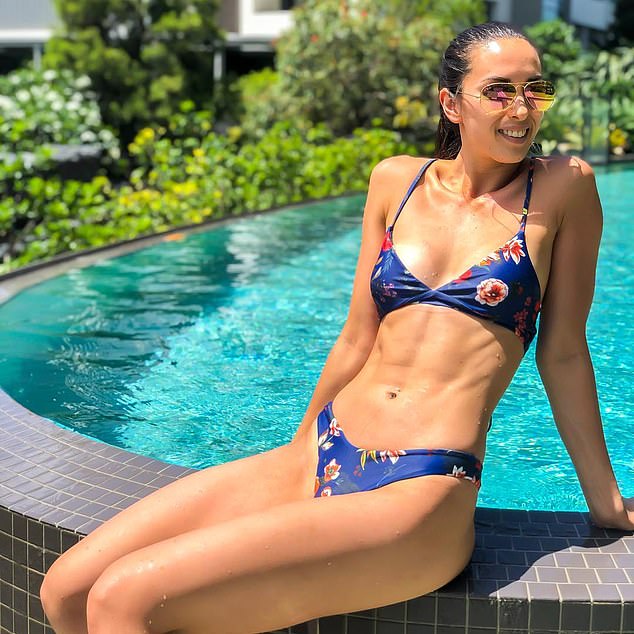 Leanne (pictured) previously shared some of the biggest health and nutrition myths, including the fact that one style of eating works for everyone

Previously, Leanne revealed some of the biggest health and nutrition myths.

She said the biggest nutrition myth around is that one diet or style of eating works for everyone:

‘Don’t be fooled into thinking that what worked for your friend or neighbour or work colleague might work for you too,’ she told Daily Mail Australia.

‘At work, people often ask me how much I weigh or how many calories I eat, but it’s completely irrelevant.

‘I’m 1.83 metres tall, so what I eat is going to be very different to someone who is 1.53 metres. We are all individuals and if one way of eating or one macro split worked for everyone, then we wouldn’t have an obesity crisis.’ 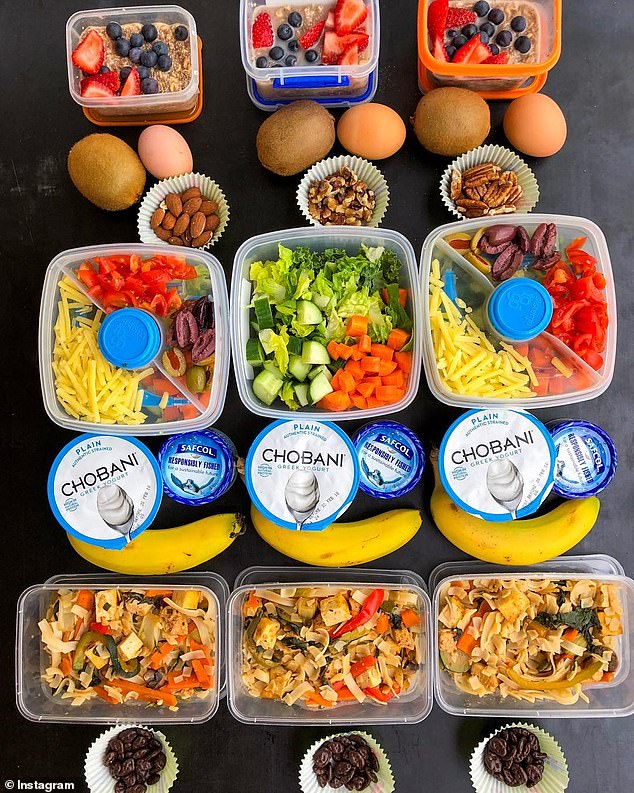 If you want to lose weight, Leanne said that nutrition is king and exercise is queen (a week of her typical daytime meals is pictured)

Leanne’s top tip is to see a professional:

‘If you are exercising and wondering what your macro split should be, book in to see a sports dietitian. Rather than googling it or asking your friend what they do, invest in your health and refer to someone who has studied it for four plus years.’

She also recommends making time for your health and fitness:

‘We all live such busy fast-paced lives that we never find the time to do anything.

‘Most of us get to the end of every day completely exhausted, order takeaway and pass out on the couch.

‘Schedule your workout into your diary like an important work meeting you wouldn’t miss and schedule some time on Sunday to meal prep as it’ll save you so much time during the week and minimise the need to eat out.’