YouTube star Ingrid Nilsen has opened up about her decision to embrace her body hair this summer, revealing she has finally gotten to a place where she thinks her hairy underarms are ‘cute.’

In a video shared on her YouTube channel in February, the 30-year-old beauty influencer and LGBTQ activist explained that she had been exploring her relationship with body hair for about nine months and had stopped shaving and waxing.

Six months later, Ingrid has filmed a follow-up in which she details how she has learned to accept the hair on her body and face during her first summer without shaving.

Scroll down for video

Feeling free: Ingrid Nilsen, 30, proudly showed off her armpit hair on Instagram in celebration of her first summer without shaving 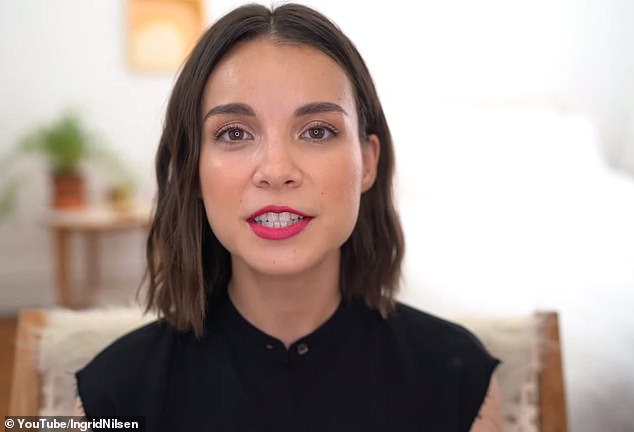 Coming clean: In the latest YouTube video, she opens up about how she has learned to accept the hair on her body and face this summer

To promote the video on Instagram, she proudly shared a photo of herself showing off her long underarm hair, writing: ‘My first summer of NO SHAVING with all my hairiness out for the world to see has been an interesting one.’

The YouTuber acknowledged in her latest video that growing out her body hair in the winter when it’s covered up is a different experience than embracing it in the summer when it’s often on display.

In addition to making peace with her body hair, Ingrid said she has also stopped scrutinizing the hair on her lip, chin, nipples, and between her brows, which she has let grow out naturally.

‘I actually really like my underarm hair,’ she said. ‘I have gotten to the point where I think it’s cute now.’ 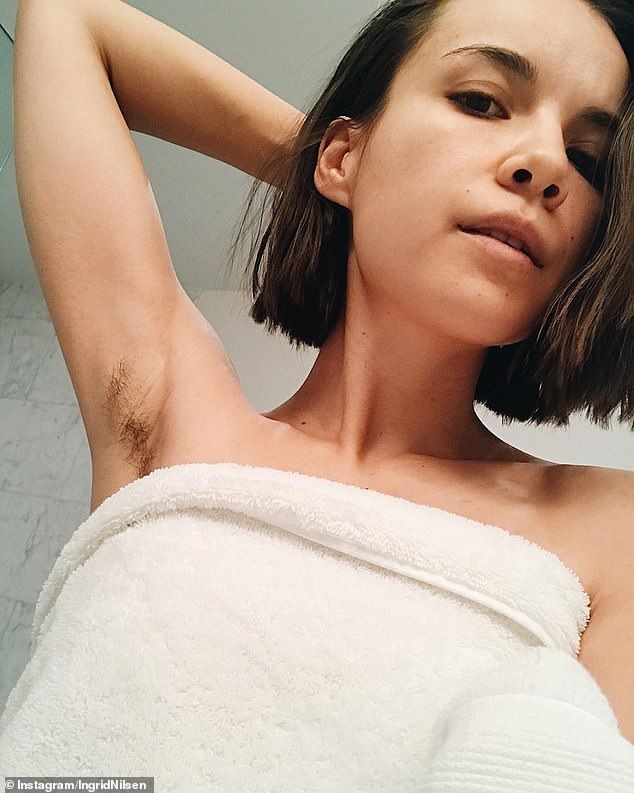 Over it: Ingrid, pictured in November 2018, explained in February that she had been exploring her relationship with body hair for about nine months and had stopped shaving and waxing 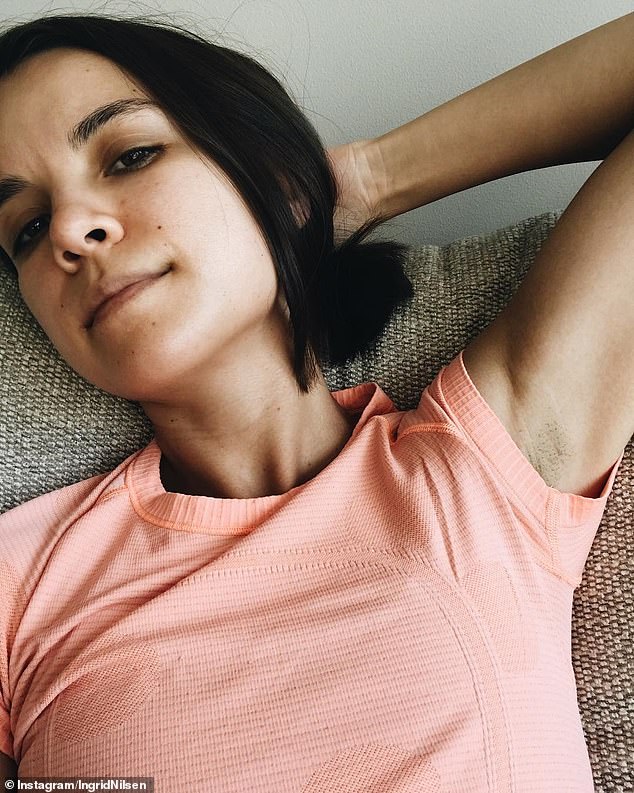 Throwback: Last August, the YouTuber admitted she went ‘through phases of shaving, not shaving, waxing and not waxing’

Ingrid said she still does some underarm-maintenance, explaining she uses an electric trimmer to give the hair a ‘tiny baby trim.’ She sees it as the equivalent of getting a haircut every couple of months.

The social media star didn’t hold back, and she spoke openly about how waxing her sensitive bikini area left her with ingrown hairs and blood on her pubic bone and vulva.

‘What I’ve learned now is that, “Oh, my pubic hair is actually here for a reason, to be a buffer between my body and any clothing that I’m wearing,”‘ she said.

Since she’s given up shaving and waxing, she noted she hasn’t had any skin irritation or infections like she was prone to before. She is also feeling better about her body in its natural state.

‘It has just been a much more positive experience for me,’ she said. ‘And now when I look down in the shower, instead of just being grossed out by my body hair, I look down and I think, “I did that. My body grew that. That’s pretty cool.” And that is a huge shift for me.’ 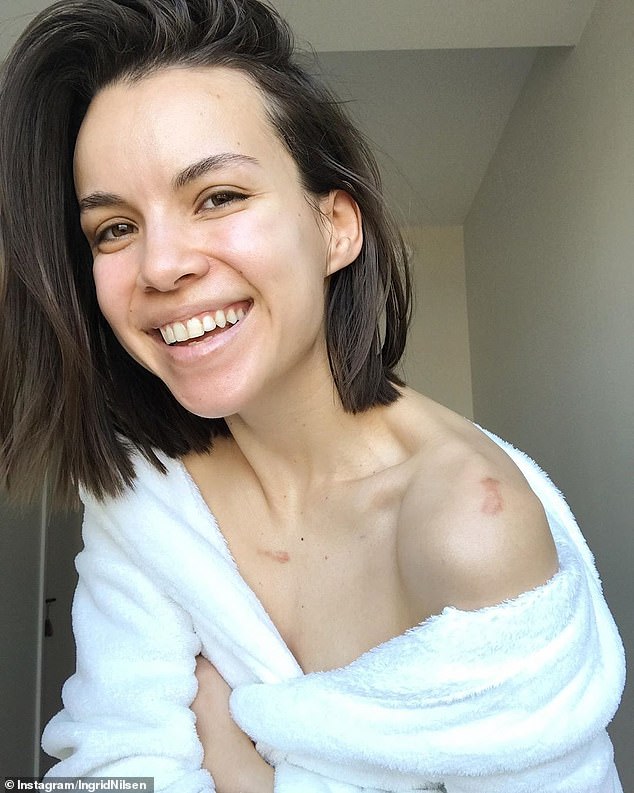 Looking back: Ingrid, who is half Asian, said her skin scars and darkens more easily, and she recalled how waxing left her with ingrown hairs and blood on her sensitive bikini area

In her video from February, she explained that she was nervous about summer because she had never had her body hair out in the open before.

Ingrid admitted to initially feeling self-conscious about her leg hair, which has gotten so long she said she can feel it moving when the wind blows.

However, now that she has gotten used to it, she only really thinks about it when she is on the subway and people are sitting next to her.

Part of what she struggled with through this process was dealing with the stereotypes associated with Asian women and body hair.

Ingrid, who is half Thai, noted the conversation surrounding body hair is usually seen through the lens of a cis white woman, which is a very specific experience. 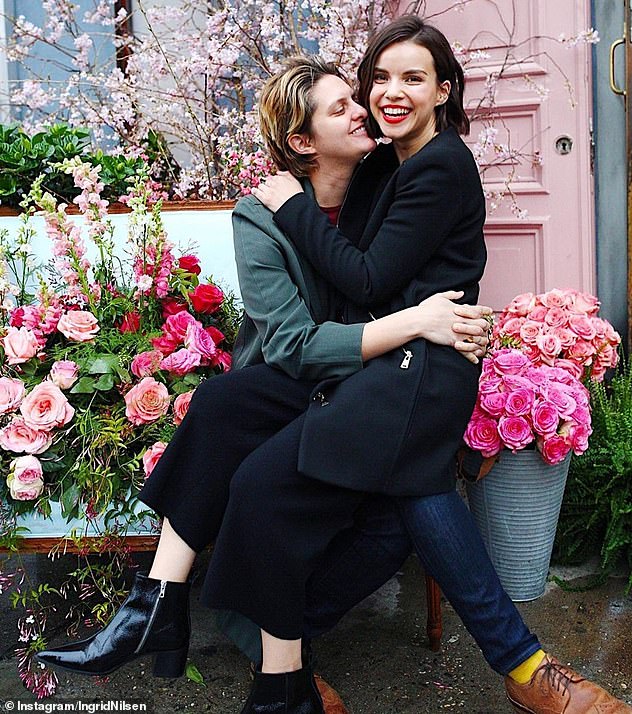 Honest: Ingrid, who is pictured with her girlfriend Erica, acknowledged that growing out her body hair in the winter is a different experience than embracing it in the summer 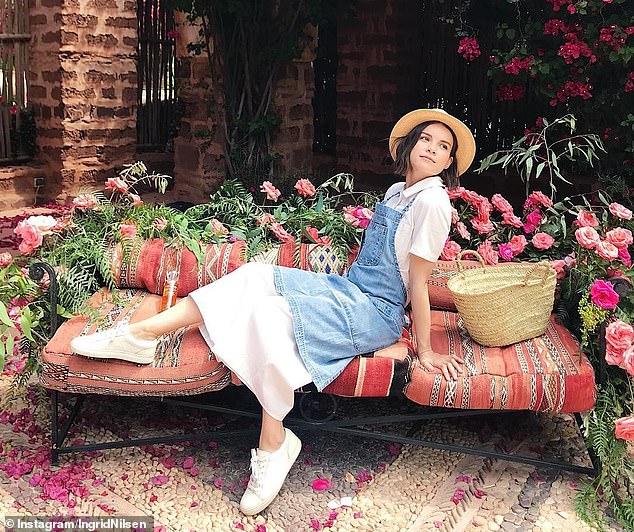 Keeping it real: Ingrid admitted to initially feeling self-conscious about her leg hair, which has gotten so long she said she can feel it moving when the wind blows, but she is fine with it now

‘In a way, it makes me feel like I’m a failure as an Asian woman to have coarse, thick hair, even though I know that there are other Asian women that have this experience,’ she admitted. ‘It’s because there’s a very narrow perception of what an Asian woman is and a lot of that is based on stereotypes.’

Ingrid said her skin scars and darkens more easily, and she recalled how she used to order whitening products to try to lighten the skin under her arms after shaving.

She also pointed out that armpit and leg hair ‘might be having a moment,’ but for women to have hair on their nipples, chin, or lips is still taboo.

‘When we think about liberation in terms of body hair, there really is a long way to go and a lot more work to do,’ she said.

Ingrid believes women need to decide what their standards, though she stressed that she is not shaming or policing other people for their decisions.

‘For me, my standard is that I want to enjoy the experience of being in my body more often than not,’ she said, explaining that while she isn’t shaving right now, that could change one day.

‘Being in a body, in general, is a painful, complicated experience,’ she said. ‘I think we owe it to ourselves and other people to have more compassion and open minds when it comes to what we’re doing with our own bodies and what other people are doing with their bodies.’